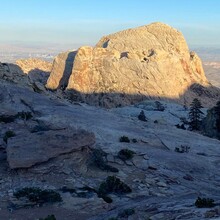 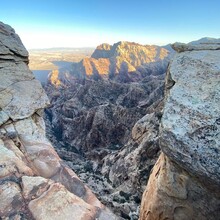 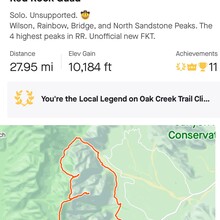 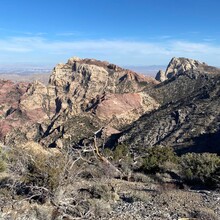 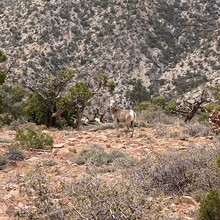 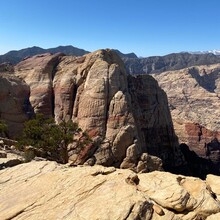 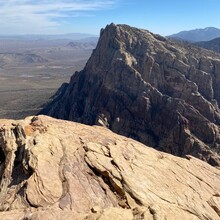 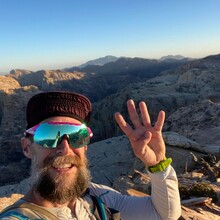 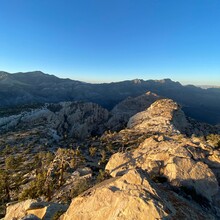 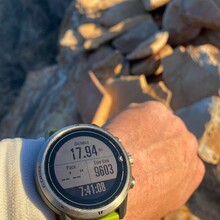 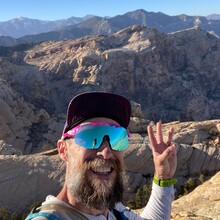 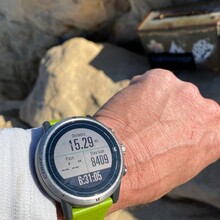 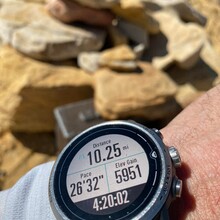 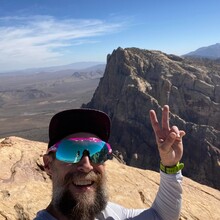 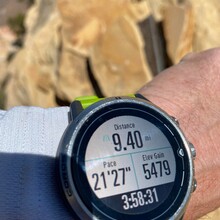 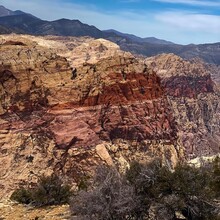 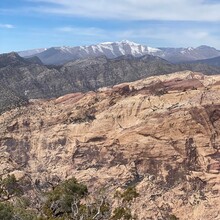 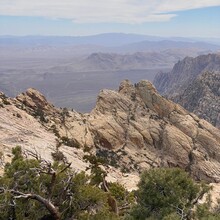 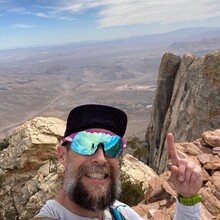 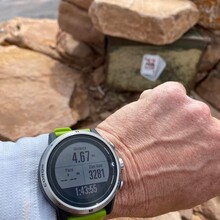 The Red Rock Quad! What an amazing tour of the Red Rock High Country. After doing this route for the first time I wasn't sure I would repeat it. Then Jason Hardrath came out and destroyed my time. I didn't think I would ever go for it again, it seemed too far our of reach for me. I have recently been training for a 100k ultra and my fitness has been improving. Out of nowhere the idea came to me that I was ready and that I should go for the Quad again. The next day I went for it and managed to squeak in about a half hour under Jason's time.

My two biggest concerns were endurance and water. I wasn't sure I would be able to move fast enough for long enough to set a new record, but after some serious training recently I have been feeling really strong. Water is the other issue on this route, or actually lack of water on route is the issue. There are no water sources up on the Escarpment and Limestone Spine, so you have to carry everything you need with you to make this an unsupported effort. I never would have even considered this route to go unsupported until Jason did it, and then I had to reconsider. I have been training in the desert and taking less and less water on my training runs and my body has gotten used to it. I have become a camel. The other contributing factor here is the season. Its late winter/early spring, cool temperatures and still some lingering snow/ice in the shade at 7,000'.

I got a late start on the day around 10:40am. I took a headlamp anticipating finishing in the dark. I had about 3 liters of water. 2.5L H2O, .5L Tailwind, an assortment of bars, apple sauce packets, and salt. I headed up the Cleaver Crack route to Wilson being that it is more direct than the First Creek approach that we have taken in the past. This proved to be a quick ascent route and I reached the Wilson summit in a personal best of 1:42. Then it was west to the Limestone Spine to commute over to Rainbow. Getting to Rainbow and back to the Limestone was the crux of the route for me. The limestone is steep and loose and there is no defined trail, just a nasty bushwack. I left my pack in the hidden forest and hit Rainbow Peak, then grabbed it for Rainbow Wall. Over to Bridge next. Tried to keep moving fast even on the crappy limestone. Got to Bridge in 6:31 total elapsed time. Took the direct commuter trail over to North Peak just before sunset. Bombed down the Giant's Mile and Rocky Gap Road at dusk. It was dark by the time I got to Willow Springs. The run on the trails out from there was laborious but I kept trucking along. I'm sure I lost some time here, these trails are hard to run in the light, and my mile splits show how much I had to slow down to not trip and fall on the cobblestone single track.

It was a pretty smooth run all things considered. I did run out of water at the summit of Bridge Mountain. I considered bailing down Fern Canyon and calling it quits, but I found some ice under the Bridge Feature and broke off a chunk and threw it in my bladder. By the time I got down to Willow Springs 1.5 hours later it had melted and I had another .5L of water for the run out. Just enough. I think this route could go faster but it will take some work by someone who knows these mountains well and really cares about Red Rock. There is a lot of difficult scrambling on route and if you're unsure of the route or not comfortable on exposed terrain you can get caught up easily.

Tip of the hat to Jason for always inspiring and motivating. Like I said before, I don't know that I would have repeated this route but after seeing him do it in such beautiful style I had to go back for me. I can see myself doing an annual lap on this masterpiece now...