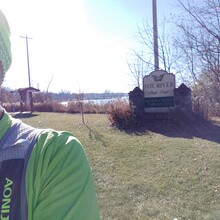 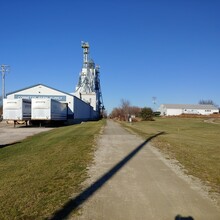 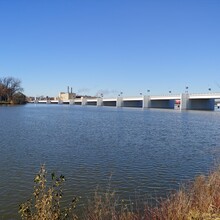 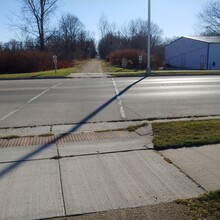 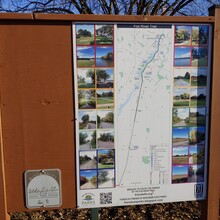 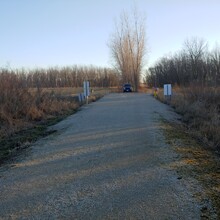 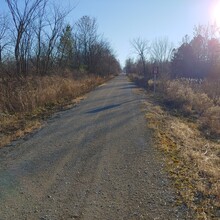 This was a DIY Turkey Trot on the Friday after Thanksgiving. Mistakenly arrived too far North by about a mile and had to get to the actual start at Porlier Pier. I got dropped off a bit later than I wished, but it was a warm November day for NE Wisconsin. I spent most of the run taking my light gloves off and then putting them back on depending on the amount of shade on the trail over a given stretch of the path. I knew the De Pere section of the trail quite well from previous visits, but the very first mile and the last 19 miles were brand new.

There are some historical markers along the paved section at the beginning in Green Bay and De Pere. The trail was very busy with people out walking, running, and biking. However, the further south I moved, the fewer people were out. This is unsurprising as the southern half is very rural. I was pleasantly surprised by how many bathrooms/portable toilets were available along the route.

I carried all of my supplies with me. 50 ounces of water was just enough, and I brought just enough snacks. The sun was bright the wind was light and there are few very few days with better weather in November. Unfortunately, I had some hip/knee/IT band issues over the last 8 miles that really slowed my pace. This required me to stop every mile to stretch out. Had it been colder I may have been in a bigger hurry so that I would stay warm. As it was warm, walking was pleasant.

The only serious issues I faced were after I finished the run. The southern trailhead has no parking. It empties onto a very rural section of road. My ride was unable to get me immediately, so I ended up walking another couple miles after the official ending. In the end it was a beautiful day to be outside, and I can not think of anywhere else I would rather be. Perhaps next year I will take a longer Turkey Trot, but this one was great! I would love to run this in the opposite direction in the future.