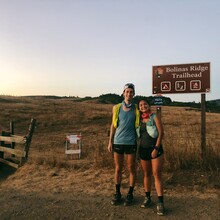 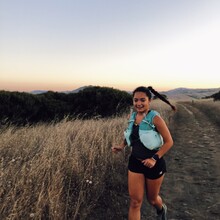 I saw this route earlier this week and noticed that there was no listed FKT. I've wanted to run the Bolinas Ridge trail for awhile and thought that this would be a great way to do it! I did the whole thing with my boyfriend, Jake, and we stopped for water at Pantoll campground (mile 18). The first 10 miles were beautiful, and we were surprised at how few people we saw the whole time (excluding some areas around Stinson/Muir), which could have been because there was a heat advisory! During the last four hours it was definitely well over 80 degrees, which for us weak San Franciscans was really difficult. This was such an amazing route though, and I recommend it for anyone who wants a proper Headlands tour.