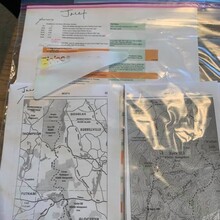 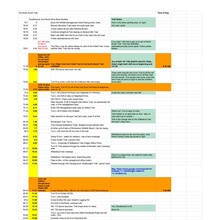 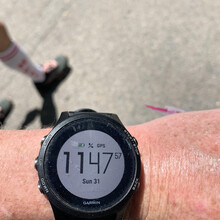 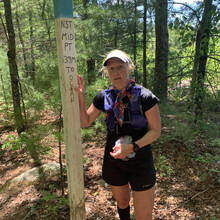 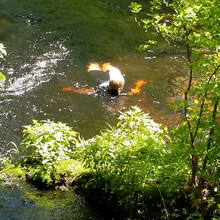 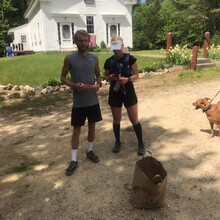 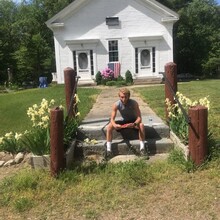 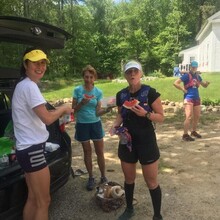 On Sunday, May 31, I attempted to break my own FKT set on the North South Trail in Rhode Island. I set the existing FKT in June 2015 at the age of 46 with a time of 16 hours and 50 minutes. In 2015 I ran with two other women through mile 25. This time I had more company. Also instead of starting around midnight I knew I would run faster so I started at 5:20 AM.

I drove to the starting area with my husband John Gadrow and my training partner Dylan Ferdinand. We parked in dirt parking lot of Buck Hill Road and ran the 1.8 miles up to the NST trail head. We recorded a video to show that I started at 5:20 AM. Dylan, John and I ran the Buck Hill section and then when we came out on Buck Hill Rd.

Dylan and I continued on the course via Stagecoach Drive while John ran back to get the car and provide some morning support. We came out of the Buck Hill section quickly. John handed me a soft handheld which was leaking and we realized a seal was broken so I made careful attempt not to squeeze it too hard and conserve the liquid.

Off we went and continue to travel about a half hour under goal pace until we saw John again while crossing Rte 94. At this point I put on some road shoes since I knew we’d have some paved sections. Feeling good and ahead of pace. Drank a lot at this stop because of leaking bottle. Road shoes felt like pillows!

We continued to move quickly until we came out of the back of Shady Acres restaurant on Rte. 6 and saw John for the final time at mile 25. Another quick fill of the water bottles and we were off. John was there with another fellow Trooper.

It was starting to heat up and we decided to slow our pace down and not get ahead of ourselves.  We were on South Killingly Road climbing a long hill and made the awful mistake of missing the left turn onto Johnson Road (mile 28.87). We traveled for a while downhill on South Killingly until we realized we were lost. My phone didn’t have good reception so we couldn’t tell exactly where we went wrong but we knew we were lost. We laid out our maps on the ground and I cried.

Our crew came and drove us all the way to the beginning of South Killingly Road - back tracking until we found where we missed the left turn onto Johnson Road - we started again at the intersection of South Killingly and Johnson Road. When I ran by the Foster Country Club I knew we were back on track - familiar roads and trails. We lost about a half an hour and it took me honestly the next couple hours to mentally regroup because I was so frustrated with myself for missing the turn. With all the rain this spring there was a lot of moss on poles and trees that covered some of the markers. We knew we had to be really alert for rest of trail.

At this point I decided to take a photo of my watch and video each checkkpoint as further proof that I stayed on the route for the FKT).

We next meet up with friends at the First Christian Church in Rice City at mile 34.41. We were joined by Mary Camire, Dave Tetreault and Diane Sullivan. They had a pair of trail shoes that I strapped to the back of my running vest in anticipation of the mud coming up later. I also got a chance to refill my water bottles and drink some coca cola and have more gels put in my pack. We ran together through Nichols Farm and I got to show them the beautiful Trestle Trail. When we crossed into the Steppingstone Falls area at mile 44.69 (see photo), I took off my pack and lay down in the cold water to get my core body temperature down. I also put on my trail shoes.

We moved to Arcadia in the mud pretty quickly until we came to the West Exeter Baptist Church on Route 165. Dylan Diane Dave and Mary were done for the day. I was met here by my other running friend Janet Sanderson and Mary Kutcher and Janet’s dog Tiki. We ran through the Arcadia Boulder Field, the most technical section with all bouldering.

Janet and Mary ended at the Richmond Town Hall on route 138. We got there at 5:17 PM and left after 5:22pm. At this point a new running friend Dave Czerwonka join me. He had moved here from San Diego and was an ultrarunner and didn’t know there were trails in Rhode Island. I had put on road shoes again at this point. Took extra time to refuel and cool off. It worked!

We moved quickly picking up pace through Carolina Management Area to the Meadowbrook Pond on route 91.

Dave was done at this point and I picked up my final crew Ron Longolucco who is a RISP Trooper with my husband. Ron was just the drill sergeant I needed who moved me through the technical Burlingame Trail section. I had hoped to finish before the dark but with getting lost around mile 29, I lost about a half an hour of daylight. We put our headlights on and made it out to Rte. 1. Ron told me to sprint and at one point my watch was reading an eight minute mile. It felt like I was running a six minute mile. I finished at the beach at 9:11 PM. The time was recorded on video and with a video of time of day by watch by John Gadrow. It was witnessed by Mary Camire and Ron Longolucco.

(My Strava watch shows longer in last mile but it is because I didn't turn off my watch - I looked down in car and realized it was still on! - but the video taken by my husband at 9:11pm shows the actual finish time of day. And he videoed our actual start time of day at 5:20am)

My nutrition during the attempt was tailwind Colorado cola, gels, water and coca cola. At mile 49 I had a slice of watermelon. With 12 to go I had a handful of chips.

Lesson learned – check seals on bottles. Know ALL the turns and stay alert.

Congratulations on this great effort.  Any chance you would be willing to share your spreadsheet?  I am thinking about attempting an FKT in November.  Cheers! Rob