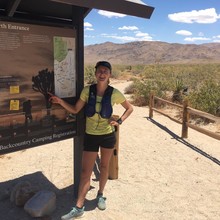 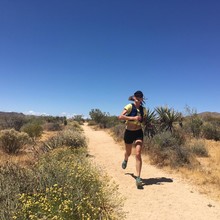 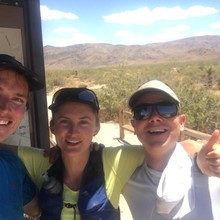 Wow wow the flowers! Colorado and mojave deserts wow insane ecosystems. Alastair started w me, dropped him idk mile 10? Jeff at 18.5 with 1.5L liquid top up. Then cruisey death to the finish! Hot af, like 80F. ? so epic I’m so psyched. Sarah keys has an amazing unsupported of 5:17. I wanted the support and it’s so so easy to get the support via the park roads. Perfect states training. Team Fast And Fruity is ready ? (ish) more to come. The flowers omg. 4;52:25

Started with an anti-alpine start of just after 7am, full well knowing that I'd be running in the heat of the day (80F). Alastair started with me, we chatted and squealed for the first 10 and then he got attacked by a cactus (or so he says) and stopped to take out the prickies and then he was insight behind me for a bit, but then I stopped looking back and just settled into a steady push charge pace, knowing that I was barely on Sarah Keye's time by 18.5 miles. Jeff was there where I stashed the water, coke and mt dew the night before. It's such an easy stash spot off Keys View road (don't stash on the parking lot spur, it's technically off the trail; also, don't stash food because the squirrels will eat it, as evidenced from camping nights prior). I peed while Jeff refilled my three .5L soft flasks, dropped some trash and left at 2:38 elapsed time. I forced myself to stay on the gels for the next few hours, as I had some tough bonks with the heart and relentless pace I needed to keep. The second half is super exposed, lava rocks baking in the distance, and there's nothing technical at all, so you can and should keep a fast pace. I had a surprise crew visit around mile 30 (another road crossing, so ideally future people should take aid here), but I didn't plan on getting aid here and didn't need it, so I just ran through. The trail gets confusing for a half mile towards the end -- it crosses over a wash runout a bunch, so keeping eyes on the stakes is critical. I took a wash instead of the trail for about .2 miles and it felt wrong, so I stopped, looked at my map (used Hiking Project app) and then got back on track, hence my weirdly slow mile at 35. There was a glorious breeze, which made the heat much more tolerable. I don't recommend this during the summer. But overall, a world class desert single track and if you're lucky, the most breathtaking blooming flowers juxtaposed against the desert floor. And of course, a horizon filled with the otherworldly spectacular Joshua trees. What a treat!!!!!! And honestly, if going for an FKT, the supported version is so simple. I think my time could be dropped significantly if done in winter and utilizing all potential crew spots. Get after it!