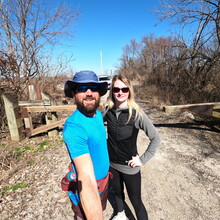 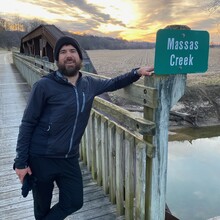 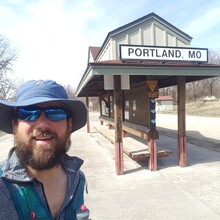 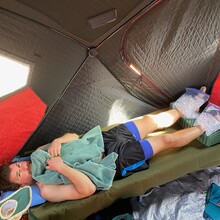 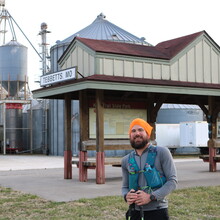 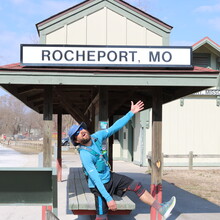 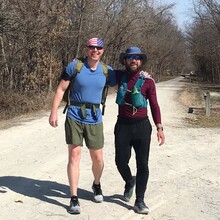 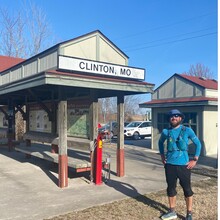 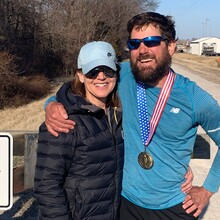 At 2:00 PM on March 4th, I began at the Machens Trailhead.  I was accompanied by my crew chief, Angie, who supported me the entire time.  The weather was beautiful with sunny skies and a bit of a tailwind.  There was a short detour just East of St Charles that added about a quarter mile.  I stopped for 5-10 minutes at each little town and resupplied with Angie.  I pushed through the first night with no sleep, only short resupply breaks.  The temperature got down to near freezing.  After a long night, she had a wonderful hot breakfast sandwich waiting for me in Rhineland that gave me the energy to keep moving.  I took a longer break in Portland around lunchtime before setting off an hour and a half ahead of my planned time.  Everything was going great!  I ran over the "rockslide" trail closure just west of Portland.  At Mokane we met up with my Uncle Bill and Aunt Glenda.  They helped take some of the pressure off Angie and the three of them began supporting me.  As I went into my second night with no sleep, my pace began to slow, and running became more and more difficult.  I made it to N Jefferson around 8:00 PM, devoured some Casey's Pizza, took an hour long nap in a tent at the trailhead, and then took off about 10:00 PM.  It was another chilly night near freezing.  The miles and lack of sleep were catching up with me, and I struggled to make progress by myself through a couple more small towns.  My aunt Glenda paced me from Wilton to Easley.  I decided I needed another nap there, and took a 30 min snooze in Easley at the trailhead.  As I set out from there around 6:00 AM, the sky was beginning to lighten and I started to move a little better.  I used the restroom at Coopers Landing and continued on taking short 10 min breaks and resupplying with my crew at each town.  Just west of Rocheport the trail was closed due to a bridge washout.  Luckily the water was down and I was able to get across Salt Creek without getting wet.  The stretch from Rocheport to New Franklin I began to lose steam.  I was told my mom and her husband Chris would be at New Franklin, and tried to use that as motivation to push on.  About a mile or two out from New Franklin a figure appeared that I knew well, it was my mom, coming down the trail to meet me!  We had a "moment", and then put our heads down and kept making progress.  She told me her and Chris were going to pace me the rest of the way!  I was thrilled!  I planned on doing nearly all the trail without a pacer, so this was very welcome news!  I took an hour and a half break in Boonville and strategized with the crew.  My mom and Chris took turns pacing me to a few miles outside of Clifton City.  At that point they went ahead to Clifton City to set up my tent, and Angie paced me into Clifton City.  I slept about an hour there, before setting off at 1:00 AM.  Chris and my mom again took turns pacing me into Sedalia.  I took a 15 min nap in the car at Sedalia.  As the sun came up I began to realize how close I was getting.  I began to feel a surge of energy as I ran with Chris from Green Ridge to Bryson.  As my speed picked up, so did the headwind.  My mom and Chris began to worry if they could keep up with me.  Both had already covered over 20 miles which was more than they had ever done.  But the cavalry was coming, and in Bryson three of my buddies showed up to cheer me on and help pace.  Mark ran with me from Bryson to Windsor, where my buddy Jeff joined in as well.  We talked, laughed, and covered ground while the euphoria of the approaching finish line kept me going strong.  In Calhoun I devoured 2 milkshakes.  Mark continued pacing me, and Angie joined us.  We pushed hard into a strong headwind the last 9 miles.  My entire crew was at the finish line with signs, hugs, and high fives!  We did it!

I took a different approach to this FKT than the previous runners.  I am not the strongest runner, but I am a grinder, and I tried to use that to my advantage by staying on the trail and minimizing sleep.  I lucked out with great temperatures and no precipitation.

My support crew did an amazing job keeping me going!  They had very little experience doing anything like this.  Their ability to work together, along with unwavering love, proved them to be more than qualified!  Angie is a selfless angel who helped me with hours of training and logistics leading up to this.  This would have never happened without her!

I donated one of my kidneys to my Uncle Bill almost two years ago.  Putting my mind/body through that was the hardest thing I have ever done.  I promised myself after that experience that I would never take my mind/body for granted, and that I would never doubt what I am capable of.  This adventure confirmed what I already knew.  Never under estimate your mind and body - there are no limits!