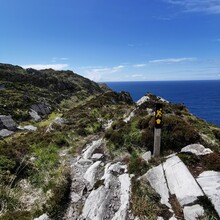 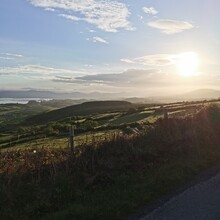 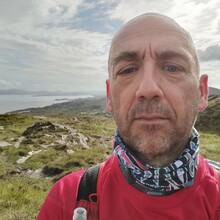 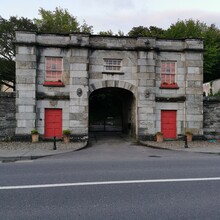 After failing to finish the route several weeks earlier, I made another attempt on Monday. It was intended to be unsupported but I stopped at mile 34 and bought water/coke/sweets in a store. I also topped up one flask from a stream.

The day started in Bantry at the gatehouse of Bantry House just before 6am. The pandemic meant that the House gates were all shut, so the alternative first mile or so on the main road had to be followed.

Once off the N71, it alternated between off-road and back roads for 4.5 miles until the main section of the trail began. I had gorgeous weather, the ground was damp underfoot but not a quagmire and my stripped-down running pack was working perfectly.

Everything was going great and I was making good progress but then at mile 8 I had a heavy fall on a wet slab. I landed on my right hip but weirdly all the pain was in my left one. Along with a messed up right knee. From then on, the hip made uphills hard and the knee made downhills hard. My usual "I'll just run/walk it off" didn't work. They both got worse over time but not unbearable.

I made it to the end of the peninsula with little trouble apart from those pains and then started on the return leg. By the time I got to Ahakista I was 4.5 hours up on my previous attempt. But this was where a series of off-road sections that I'd skipped previously began.

All was fine as I made my way towards Durrus and all of the cow challenges from the previous attempt were missing. My main aim was to get to Durrus before it got dark. I managed this and did the couple of miles along a reasonably busy road before I got to the final off-road piece. And darkness. The route was relatively easy to follow as the signage every hundred metres or so remained visible with my headtorch. But the hip and knee got so bad at this point that I was barely moving. Onwards I hobbled.

The route offers two options for the last 10km or so - either the main N71 or a forest track and hilly back roads. I chose the latter, despite the extra difficulty, as I had done the N71 before and did not feel safe due to the small hard shoulder and fast cars.

For some very odd reason my head was fine throughout the 60 miles. And I just kept on grinding it out until the end.

I finally staggered into Bantry after 3am and ended back where I started at the gatehouse. The local police eyed me with amusement from their passing car.

Whilst this was mostly a hike rather than the intended run, I'm so happy to have finished it. It's the longest I've ever travelled on foot and yet I somehow managed to get zero blisters!

It's an absolutely fabulous route that I recommend everyone tries, even if just some of the defined sub-loops. The views are spectacular and the terrain is varied. You will see ocean, hills, fields, cows (many cows), sheep (unsurprisingly), old famine cottages, an old mining village, a lighthouse, more ocean, some tiny villages, did I mention all the cows?, heather, gorse, rocks, quiet roads and lovely people.