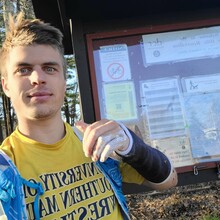 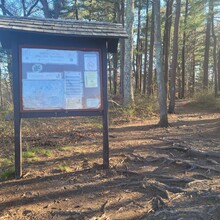 Nearly 1 month ago I broke my wrist taking a hard fall down one of the steep hills on an out and back training run here at Blue Hills. I have continued to train and have always had future intentions of breaking the out and back or double out and back FKT. Today, I didn't have any intentions on breaking the FKT but after I finished the first out and back in 2 hours and 35 minutes, I decided to fuel up again and load my bag with more food and water. I felt good enough to go for a second out and back, but I didn't realize I was in for a surprise at about mile 24. The cramps were on and off and the last 5 miles were all a blur. I ran out of water with 4 miles to go and it definitely slowed me down a lot. Today was really fun and I think this double out and back can be done in sub 5:30 comfortably. As I could see the end of the trail, my watch died with 400ft remaining when I was at a time of 5 hours 43 minutes and 54 seconds. According to Strava, I was running an 8:15 minute mile at this time, so I added an extra 30 seconds to my total time. On my first out and back I ascended up Skyline Trail South and descended down Skyline Trail North. the second out and back I ascended up Skyline Trail North and Descended down Skyline Trail South. I lost over a minute of time at every road crossing with the crazy traffic and I was swarmed with the COVID zombies, which also slowed be down trying to continuously pass them. I cant wait to go back and do this run again now that I know what to expect.

Regional Editor Note: Upon investigation this time is too close to call.  The last point on Strava shows a 9:54 pace and about 0.10 mi that Corin's watch missed.  At this rate it would have taken an estimated 60 seconds to finish off the run.  Because those data don't exist I don't feel comfortable with the above math.  Therefore I am flagging this effort.  Corin's time will be acknowledged but Shane's must be beat for the official FKT.  Additionally, it seems that Corin did not go as far as previous runners on the western edge of the trail where the turn around is at the random guard rail/paved area - please see previous maps for this distinction.