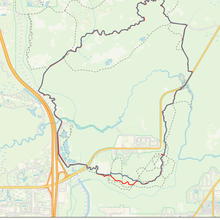 I attempted the Morris Bridge FKT Loop on April 20, 2021 while on vacation in central FL.  The weather was cloudy, mid 60's, and 100% humidity.  It was a nice loop and an enjoyable run.  I ran unsupported.  Carried fuel and took once around mile 6.  I saw lots of wildlife including about 5 deer, 2 wild hogs, 1 opossum, lots of birds, and sadly, one dead gator on the side of Morris Bridge Road.

The middle portion of the route includes several miles of winding single-track trail which is fun and keeps you on your toes, but also makes it hard to keep up much speed.  I would recommend familiarizing yourself with the route in advance as it's not all well marked and is easy to get off track in some places.  I got off track twice in the first 4 or 5 miles and had to backtrack slightly each time to find the route.  I also made a bit of a mistake on the section south of Morris Bridge Road along the "Grandpa" trail so I didn't run the exact track of the previous FKT.  The short section where my route diverged from the original FKT took about 0.1 mile off my distance compared to the prior FKT's.  I decided to submit my attempt anyway despite this mistake as it certainly does not make up for the difference between my time and the past FKT of over 8 minutes.  If this is an issue, I'm happy to remove my submission from the "official" FKT and just put it in as an attempt in the comments.

[Editor's Note: As Daniel explains, he did deviate from the route slightly. I've included a screenshot of Gaia that shows where he went off. While Daniel certainly would have broken the previous record if he had went the right way, the next effort need only be faster Russell to set the FKT.]