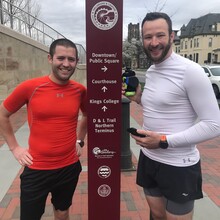 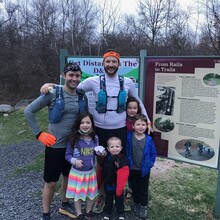 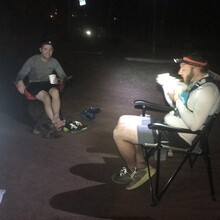 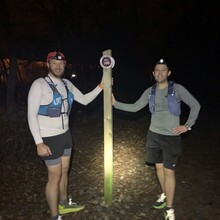 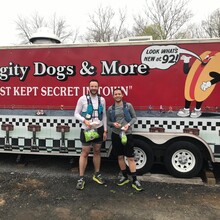 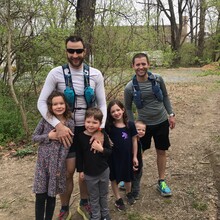 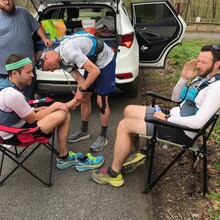 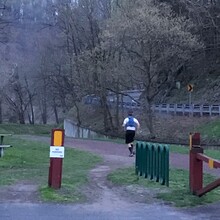 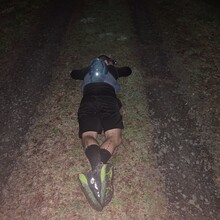 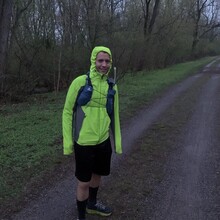 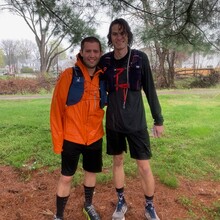 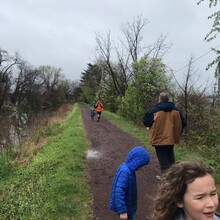 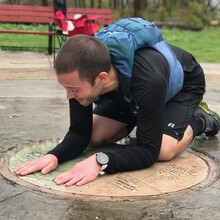 First, some "thank you's" before a recap of the trail.

Ray Delacruz, Bethlehem to Palmer Riverview and again from Morrisville to the finish

Nolan had the pleasure of dealing with the sleep deprivation I was experiencing, reaching 56 hours without sleep by the time I made it to the hotel.

Dr. Mike took my phone call when I wanted to quit Saturday evening.

I can't imagine myself finishing without any one of these people and the help the provided. Just knowing I didn't want to let them down kept my feet taking steps.

Sean Tracy & Holly - thanks for the surpise aid station you created. I saw your flashlights ahead of us and asked Nolan if he was ready to fight should there be any issues (did I mention hallucinations?). Your cheering me on meant a great deal.

We started at 2:37PM at the northern terminus in Wilkes-Barre. Like any long run, the first miles fly by as we passed people in downtown W-B and would yell over "Hey, we're running this whole thing!". We love the woods, so the section through the woods up to Mountaintop was our favorite. Saw some new improvements the D&L put in since we last trained there. We first saw our families at the Mountaintop trailhead and even had our kids run down to join us for a few hundred yards. We saw them again at the Black Diamond trailhead as we grabbed our flashlights knowing the sun would set in the next 10 miles before we saw Landon.

While our spirits were still high, we were beginning to notice some foot pain that we hadn't felt before and didn't make sense only being ~20 miles in. We know there should be no pain before 50 miles and it wasn't just tightness.

Landon made us dinner in White Haven just before midnight as we had a long stretch ahead going through the Lehigh Gorge. Ramen never tasted so good!

Lehigh Gorge was impossibly long. By now, the pain was severe. We believe that the unchanging conditions (flat trail, no deviation in muscle groups or foot strike) was causing the nerves in our feet to be damaged, at least temporarily. If you've experienced nerve pain, you know it's nothing like a muscle cramp or tendon pain. It's sharp, hot, and acute. We knew this run would be unlike our normal single track trail runs.

Arriving in Jim Thorpe meant two things. We finally complete the Lehigh Gorge and we picked up our first pacer. Wow - having never used pacers, this was great! We love talking while we run, so Brandon probably felt like he was being interrogated by us the whole time. What do you do, what's your normal training, where do live, etc.

As dawn was beginning, we met Gayle who brought out some fruit and drinks. He drove a little more south before he started pacing. We saw the "100 miles to go" mile marker. That felt good to see!

When we picked up Gayle, we now ran four strong and had a few good miles. The pain wasn't better but at least it wasn't getting worse. We went through the Lehigh Gap and felt the strength that you get when the sun rises.

We stopped in Slatinington at the Diggity Dogs and More food truck. They treated us to a delicious breakfast and inspired us to keep going.

We hit some low spots. Gayle kept our minds occupied while we all had good conversation and blended significant walking breaks in with runs. Gayle was a blast to run with and even ran further than any of us had planned. That really helped. He said he'd get us to our next pacer.

When we reached Northampton, we picked up Dr. Mike. We've talked to him before but had never met him. He was a joy to be around and helped us navigate the Lehigh Valley. We added another pacer in Allentown, Steve and once again ran in a pack four strong. We then added Ray right before losing Mike in Bethlehem.

Bethlehem was a highlight. We met Jake and his teammates from Lehigh University (thanks for being there!) and met Pat Heine. He just set an amazing FKT on the Mid-State trail. His stopping by to cheer us on meant a great deal to both of us. Pat, thanks for stopping by. Once I got over the surprise of realizing who you were, (having just watched you last week on FKT's website), it was a big inspiration.

We continued along the trail and had some low spots again but by the time we dropped of Steve and finally Ray, we realized we were way behind our 40 hour mark and that this wasn't close to being over. That didn't help our spirits, but we tried pushing from Palmer to Wy Hit Tuk park. We made up some time, but knew we couldn't keep that pace much longer. Sunday afternoon would be our finish, Sunday morning was lost.

Shortly after Wy Hit Tuk, Albert dropped. I was so sick of being out there, I threw my headphones in and ran out of pure frustration. I put some good times and came up to Nolan. I asked if he was ready to help make history even if it wasn't pretty. He was and it was time to go.

A few miles later, we have our greatest challenge. I had started charging my watch while tracking the run but when I unplugged the charger, the watch crashed. I panicked thinking it was all lost. We stopped and found the run on my phone saved (though now, I've learned it stopped logging miles when I plugged the charger). The map on my COROS app shows longer than Strava. I'm waiting to connect with tech support to learn what happened. We started logging another run and kept moving. Another mile later, it crashed again but this time without saving. We did have our Somewear Labs global hotspot the whole time. Hopefully that proves to FKT that I did in fact run the whole thing!

I entered a lot of pain caves over night. As things unravelled, Nolan took over coordinating Landon and I to meet up since he knew the area so well and made sure I was eating and drinking. We just took it one mile at a time.

By the time the sun came up, it started to rain (just after New Hope). "Only" 25 miles to go. Too close to quit but too far to start pushing any harder. We knew I'd lose Nolan around 10AM and that there was no other pacer scheduled (Ray's arrival was a surprise). If I lost Nolan, that meant 10 lonely miles to finish. We set our schedule and plans around how best I survive that. Filled up on calories when I could and knew I had to save some energy.

Once Nolan dropped off, I struggled. It would take me 3.5 hours at my current pace to move 10 miles. I was barely crawling. Then, Ray came around the corner. I told him I needed to walk but we did try some running. It didn't work. We targeted 1:30PM and even that would be a struggle. Saw the whole group again when passing a Dunkin Donuts. Said hi but didn't even stop. Just. Keep. Walking. Something happened at 3.5 miles to go. I told Ray we just had to get it over and we took off! We ran the finish dropping 9 minutes miles (which, at this point feels like you've never been that fast in your life).

Seeing the southern terminus felt like winning the Amazing Race. I felt to the ground and knew it was over. Wow...

Having said back on the trail that'd I'd never do this again and that it was a terrible idea, it took about 30 minutes for me to realize I could shave some time off.