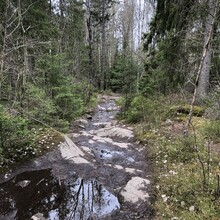 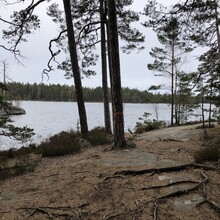 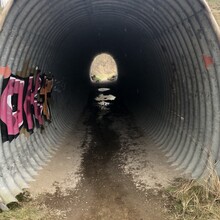 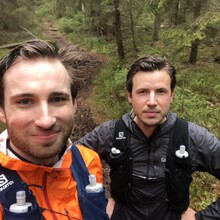 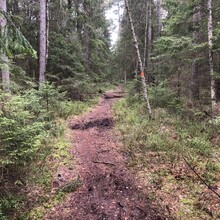 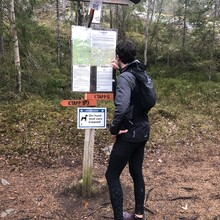 Johan and I started out in Björkhagen in good weather at 08.00am. We kept up a decent pace during the first two sections, which are rather non-technical and flat. The first natural water source was at the 6th km and was flowing nicely with clean water. We took a quick stop to fill up the little water we had drunk. As we moved on to the third section (Alby to Tyresta by) the terrain got a lot more technical, with lots of roots and stones. The water source at around the 22th km did not look any good, so we pushed on, betting on some of the public taps available on the upcoming sections. In Tyresta By, we stopped for around 15 minutes to eat part of the food we brought. In Handen (the intersection between the 4th and 5th section), we were able to retrieve water from the public tap. By now it had started to rain, and it kept raining for the remaining part of the run. From Handen to Paradiset (the 5th section), we had to move slower, partly due to the technical terrain and slippery roots, partly due to having run a marathon distance already. In Paradiset, we took another break to replenish energy and retrieve water from the public tap. During the last section (Paradiset to Huddinge) the rain had made the trail wet and muddy which was an unwelcome addition to already tired legs. In addition, at the small village of Gladö Kvarn, they were making a major renovation of the road and had removed the trail markings for around one km. This lead to us making a wrong turn and spending a good 15-20 minutes backtracking and trying to figure out where we were supposed to go. At 9hours 36minutes and 9seconds, we reached the end of the trail at Huddinge.

1) The first and second water source are natural and, as we noticed, might not always be reliable. The public taps available (at Handen 38km and Paradiset 50km) are, however, trustworthy, making unsupported runs for this route manageable.

2) Looking at the data, we seem to have run close to 70km. The slightly longer distance as compared to the route information is probably due to the wrong turn at Gladö Kvarn. Taking a look at the data on vertical meters, however, there seems to be larger differences. Strava recorded around 1000m of vertical gain, while Suunto registered around 400m (i.e. closer to the route information). From experience, I know that Suunto notoriously underestimates the vertical gain, and based on our feeling from the run, an educated guess would be that the vertical gains exceed the 600m stated in route information. Whatever is the correct figure, the route did manage to make the legs feel tired!