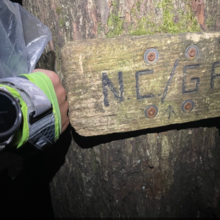 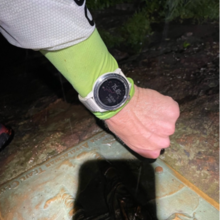 After completing the Georgia Section of the Appalachian Trail last June, I have wanted to redo it to go after @james Wray's record. After an unsuccessful attempt in October of last year, I knew I had to at least try one more time.

I had two crew members, Melanie Salas and Michele Reid, how assisted me along the way by meeting me at the major road crossing for nutrition and hydration resupplies. Originally, we had planned to have me leave the border around 4 or 5am on June 19th, 2021. However, late in the week a tropical system developed in the Gulf of Mexico and proceed to make it's way north. I know that we would get slammed at some point, so the longer we waited, the worse it would be.

I left the drop off point at 2am, and hiked 3.5 miles in to the start, the NC/GA border on the Appalachian Trail.

I started my watch a hair after 3am, and headed south. My first pacer, Paul Tilley, would be waiting for me at the first major intersection, called Dick's Creek Gap, to do the first 16ish miles with me. From there, he would accompany me to the next crew stop at Unicoi Gap, where I would pick up my next pacer, Michael Scoggins. Michael did a 14 mile stretch with me, ending at Hogpen Gap. From there, Paul would join me for would join back in for the next two major sections (Hogpen Gap to Neels Gap, and Neels Gap to Woody Gap). Once Paul and I arrived at Neel's Gap, I was also joined by Dmitry Korneev, he would stay with me for the remaining 50km stretch tot he finish. At Woody Gap, Paul finished his day, and Dmitry and myself continued south until we would connect with Jason Martin, who would run with us, but also run ahead and prep the crew for what we needed.

The day went very smooth, until mile 15, when the lack of sleep had me sleep walking on trail, seriously considering bailing early. After taking in a little caffeine however, I was just fine for a very long stretch. I changed my shoes half way through the run at Hogpen Gap, but noticed when we arrived that the tropical weather system we were worried about was basically on top of us. We stayed dry until Neel's Gap, and then the sky started to slowly open up. As we climbed up Blood Mountain, the high point of the route, it became obvious that the weather wasn't getting any better anytime soon. By the time we hit Woody, we were getting hit with some pretty good wind/rain/fog, so I changed shoes again, grabbed my rain gear, and we left. While we were there though, my stomach started taking a turn for the worse. Solid food wasn't working, and anything I consumed would immediately come back up. After trying numerous things to settle it, I finally gave up and stuck to a few liquid calories at the aid stops. Between the weather and my stomach, pace slowed down dramatically compared to the rest of the day.

For the final mile up to summit of Springer Mountain, we were accompanied by substantial lightning, thunder, rain, wind, and of course the fog.

We trudged our way up the trail, which as this point had been a river for hours, finally reaching the first White Blaze on the summit on Springer Mountain 20hours30minutes7seconds after we started.