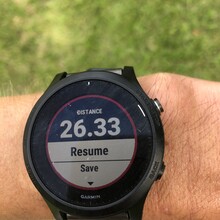 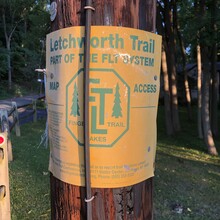 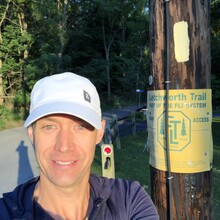 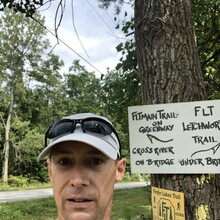 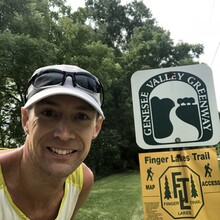 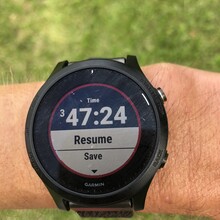 This trail has thwarted me before in a prior attempt.  It can be a real beast in muddy or hot conditions.  I managed to start in temperate conditions (58 degrees) on a trail that was dry, hard and in great shape.  I had spoken with Jamie Hobbs prior who strongly suggested the SOBO direction despite net elevation gain.  He was right, the sweeping downs afforded on SOBO made for much better running and overall flow.

Other than coming across an unleashed dog belonging to a bloodied visually impaired hiker just behind, who I offered assistance for adding some 5 minutes, it was relatively uneventful.  I used 3 gels, 500 ml of coconut water, and a little under a liter of water all carried from the start on my person in a hydration vest.  I tried to keep the push high while not overcooking the early part of the run.  By 2 hrs, I was behind my goal by about a mile.  Thankfully not much more was added over the time that followed.

The trail is very poorly marked at the southern end where it has been recently rerouted.  Make sure to scout it prior otherwise you will spend lots of time way-finding aggravatingly close to the finish.  Jim Mollosky had given me a ride to the start and then driven to the conclusion to run back from there to join me for the final miles.  His scouting saved me countless minutes of heartache way finding at the end.  I started and finished where Jamie had likewise started and finished, at the first marker on Sickles Road where the Letchworth branch of the FLT meets the Greenway trail, and the final marker at the end of River Rd where it meets Rt. 19A and the main branch of the FLT.