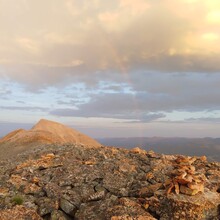 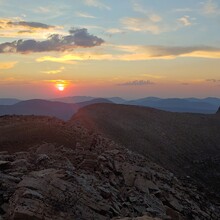 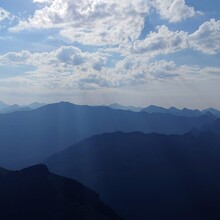 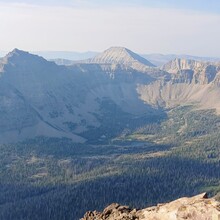 Due to afternoon thunderstorms, I started just before 8pm in a light drizzle. Despite not having done the route before, navigation was not bad with the help of the GPS track and Gaia (GPS app). I completed the route solo in 16 hrs, 35 mins.

I saw no one except for at the trailhead, but enjoyed spotting campfires and headlamps down in the drainages earlier in the night. Once I hit the trail section I passed several tents in the dark.

I "straightened out" one section: instead of traversing out on the southwest face of the peak immediately above (and south east) of Amethyst Lake, I topped out the peak and found a relatively decent down climb through the cliff bands on the north ridge by trending towards the east (descender's right). As with much of the route, the rock was very bad, so I treated each hold with suspicion.

Although the summer has been super dry, dropping from/ascending ridges from the trail sections required crossing bogs that left my shoes soaked. I found poles to be helpful on many sections.

Smoke from wildfires blowing in from the west left the views hazy and dried my throat. That said, having 2 liters of water carrying capacity was sufficient for me.

This route served up more choss hopping than I've previously experienced in a single outing.