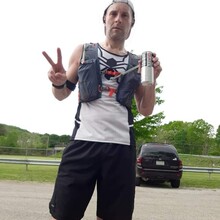 Decoded to run The hoodlebug trail in its entirely. Which is 10.5 miles. Since I had no. Support or vehicle at the other end I did it as a out and back giving me 21 miles even. I did it unsupported. I did lose some time taking pictures along the trail. But I got it done. It's a mixed bag that you've counter on the trail. Some woods, small town, and some history. Not hard to follow. Its rail trail so you cant really get lost. It was kind of hot and I wore my hydration vest with about 40oz of liquid in it. There was only a few people walking the trail that day and a couple bikes. It was in the middle of the week and not a busy weekend so I had a open trail to use. Gpt a little tired towards the end and was runni g low on liquids so had to conserve some. Not much else to speak of but there alot of history on the trail