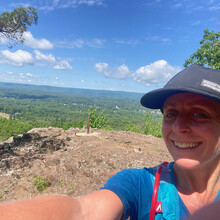 I ran the Metacomet Trail as a supported run. It was part of the CUT112, an unofficial "race" held each year on Trails Day Weekend. Most runners were doing the entire Connecticut section of the New England Trail. That is a combo of the Metacomet, Mattabesett, and Menunkatuck Trails.There are standard checkpoints, but no neutral aid. Each runner has to bring their own crew.

I started with the group but quickly moved ahead to run at my own pace. The sun was hot and the humidity grew as the day went on. I had a support team meet me about every 5-7 miles to provide water and food. I carried a 1L pack with water and supplies to fuel while moving. Navigation was pretty easy as I had been on the trail for the entire NET a few years back but there are always points when it can get confusing at road and other trail crossings. My stomach started to go a bit south around 30 miles but I did my best to continue to drink and eat. I eventually picked up a friend to run with my near Edgewood Rd. and then for the first part of the climb up to Castle Craig.

Darkness started to fall as I moved past the castle and down to the Hallmere Reservoir. My husband, Scott, and daughter, Dahlia, hiked up to greet me and see me through the reservoir. As I navigated through the last section my watch beeped at me and died. I immediately started my stopwatch on my phone. That was frustrating! A few minutes later another runner came up behind me and we navigated the dark and twisty woods together for about an hour before he decided to move ahead.

As I popped out the woods my husband was ready with a reflective vest and to cheer me to the last ~2 miles of road. My daughter jumped out of the vehicle with 1 mile to go and gave me the incentive to finish. Without my watch I had little knowledge of how much time I had remaining to get the FKT, but when I touched the Blue-Blazed sign on route 15 I stopped my stopwatch, my husband took time stamped video and we took a picture of the time. I knew I had done it as it was only 10:21pm and I had started at 8:01am!

Based on the GPS track, stopwatch data, photo time stamps, and video time stamps, I calculated a time between 14h20m17s and 14h20m50s but the exact second is difficult to pick, so I'm rounding up to 14h21m00s. This is a bit more than three minute improvement on the previous supported time. I had to go deep in the last mile to make this happen.

Note: I have more photos, but the FKT site photo upload feature has been very glitchy. If more evidence is needed, let me know.