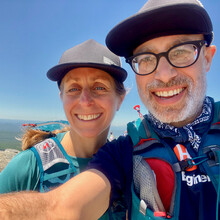 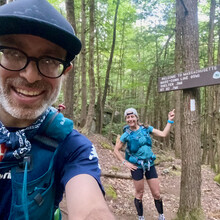 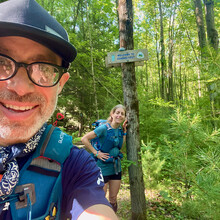 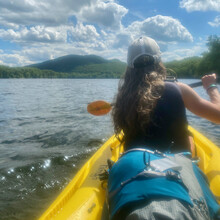 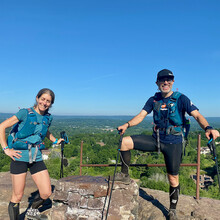 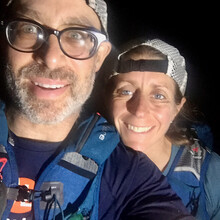 Debbie and I completed an amazing adventure that we have been planning for a long time. We ran/hiked north to south, from the summit of Mount Monadnock at Monadnock State Park in Jaffrey, New Hampshire to Chittenden Park on Long Island Sound in Guilford, Connecticut.

This route included the entire length of the Metacomet-Monadnock Trail in New Hampshire, and the New England National Scenic Trail (aka New England Trail or NET) in Massachusetts and Connecticut.

Note that our totals include many wrong turns and backtracking, which happened a lot, and should be expected. Inconsistent markings, fallen trees, delirium, darkness, and other factors caused us to struggle with navigation at crucial moments. These distance totals also include the two-mile hike to the start at the summit of Monadnock (though the climb is not included in the FKT times because our route  started at the top. However, part of the total time is the two miles of paddling on the Connecticut River and the foot travel on stretches between trailheads on the east and west sides of the river.

Also note that the official federally designated NET includes a "spur" which is the rest of the Mattabesett Trail that continues to the Connecticut River in Middletown. We did not do this section as it made no sense to backtrack. The other FKT holders have also done the point to point route and skipped the Mattabesset continuation. The elegance of an end to end hike is that we went from point to point and "Summit to Sea." That is why we started at Monadnock and included the M-M Trail in NH with the main section of the NET in MA and CT to get one continuous route. Even with those bonus miles, we found the listed distances to be short of what we were experiencing. My Garmin Fenix 6s is reliable but it does tend to underreport mileage, and even my distances were greater than what we had researched. That was mind blowing as the trip took a bit longer than expected, but we persevered.

See our Prologue blog post report for more details including tables with times and distances. In addition to achieving a Self-Supported FKT on the established full trail New England Trail (CT, MA) Route, we will submit a variation to include the New Hampshire section from the summit of Monadnock to the MA border, which added about 22 miles. This section of the New Hampshire M-M Trail may eventually be added to the full New England National Scenic Trail designation.

We also achieved FKT's on the Massachusetts Only and Connecticut Only sections.

There is yet another established FKT Route that does include the NH section of the Metacomet-Monadnock Trail and goes to the Massachusetts border, but there is some confusion as to whether the M-M Trail (in Massachusetts) completely mirrors the NET. With various trail reroutes, we are uncertain if the previous FKT matches what we did. We have to research this further.

Debbie and I are both fiercely competitive, so the FKT angle added to the fun. Doing it Self-Supported was yet another level of difficulty. Without support or aid stations, in addition to our gear, we had to carry our food and water for long distances. In June, many streams were dry, and the Connecticut section in particular sticks to traprock ridges that never have water.

To augment what we carried, we had a cache of food with our kayak at the Connecticut River crossing, and a cache of food just south of the Massachusetts/Connecticut border. We used streams and reservoirs (when available) for water and also we were able to resupply at two restaurants, a fitness center, and two convenience stores that were all on the route or within hundreds of feet of the route. Most of the stops were literally on the trail as it passed through more civilized areas.

As for the Connecticut River crossing, previous FKT holders including Lee-Stuart Evans (who was gracious in assistance with our planning), used motorized vehicles/assistance (Supported) to get around to the other side. We opted for a fully human powered journey, avoided a 12+ mile ugly (off course) road run, and stashed our kayak (plus pfd's and paddles) with permission at a local marina in Hadley. It was locked to a tree. We paddled to the Manhan River Boat Launch two miles south on the Easthampton side of the river and left the kayak and gear there.

At the second river crossing (Westfield River), we were able to wade across.

In addition to our Prologue blog post, we will have a full trip report linked from it.

This was a tremendous journey on an awesome trail. The route is rugged with very difficult terrain including copious rocks and roots. We ran when we could, hiked a bunch, and we went hand over fist at other times. Each day involved more than 17 hours of elapsed time with spurts of short rest in between. The last day was a long and painful 51-mile push that lasted more than 22 hours and went deep into the night.

Not only is the New England Trail a worthy National Scenic Trail for its beauty and historical significance, it is a substantial FKT challenge on par with similar trails including the Long Trail (which we hiked in 2005).

Summit of Monadnock to Guilford (not including hike to summit/start) - 5d, 11h, 46m