The northern terminus is just south of Mt. Monadnock at the NH/MA state border, and the southern terminus is at the Long Island Sound in Guilford, CT. It is just over 200 miles long, and it is one of the National Scenic Trails. It runs along rugged traprock ridges.

The New England Trail is now 10 years old. It comprises 4 separate trails combined to traverse 225 miles from the New Hampshire/Massachussets border to Guilford in Connecticut on the coast in Long Island Sound. In essence the route takes in most of the Metacomet Range that runs down through the middle of Massachusetts and Connecticut.

The Massachusetts portion of the New England Trail is made up of most of the Metacomet-Monadnock Trail which is 114 miles long. The Metacomet Trail runs for 63 Miles through Connecticut before meeting up with the Mattabesset Trail which donates 33 miles to the ‘NET’. Finally the Menuckatuck Trail completes the last 16 miles to the coastline and the finish of the New England Trail at the coast in Long Island Sound. This gives a total NET traverse from New Hampshire to Long Island Sound of around 225 miles.

Art Byram described the route in a post announcing an attempt at the traverse of CT via the NET:

On June 10, 2017 at approximately 11 AM, Jordan Leigh and Art Byram (that’s me) and perhaps some others will meet at the Connecticut Massachusetts border in Rising Corner and follow the New England Trail (NET) South until we reach Long Island sound approximately 112 miles later by following the Metacomet Blue Blaze Trail then continuing on the Mattabesett trail until it joins with the Menunkatuck and follow this trail to its southern terminus at the Long Island Sound in Guilford Connecticut, thereby traversing the state of Connecticut from North to South along the beautifully rugged traprock ridges.

I estimate the mileage as follows: Metacomet trail 62.2 miles + Mattabesett (partial) 33.5 miles + Menunkatuck Trail 16.7 miles for a total of 112.4 miles. Here is a link to an interactive map: newenglandtrail.org/get-on-the-trail/map

The New England National Scenic Trail (NET) is a 215-mile hiking trail route that has been in existence for over half a century. The NET travels through 41 communities in Connecticut and Massachusetts, and is comprised primarily of the historic Mattabesett, Metacomet, and Monadnock (M-M-M) Trail systems and the newer Menunkatuck Trail.

We will be supported and joined at various times by friends and family, and are looking to have others join as they wish, whether for a few miles or for the whole traverse. To my knowledge, based upon last year’s FKT on the Metacomet, no one has recorded a time for this route, however if you have, or if you know someone who has, please let us know.

This is a beautiful route, that hopefully will catch on, and encourage others to take longer runs on this trail.  What could be more beautiful than a journey in the woods?  Please let me know if you are interested in joining for some or all of this run, otherwise I will post an update after we are finished. 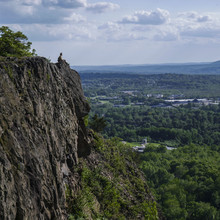 This route on the old FKT site
http://fastestknowntime.proboards.com/thread/1432/connecticut-traverse-new-engl…

Having this trail in my backyard I’ve always wondered if anyone has set an FKT. This is awesome to see. I was wondering how is the river crossing handled?

Question, the New England Trail (NET) appears to have added what essentially appears to be an out and back section on the Mattabesett Trail consisting of CT NET Sec 1 - 4 and a partial split of the Menunkatuck Trail CT NET Sec 8? What are the feeling for inclusion of this in the FKT of the NET or would this be considered a side trail? Lee-Stuart Evens FKT does not include this section. Thoughts?

The Middletown Spur section of the NET is a great trail, but should not be included in the standard route, as it is superfluous and detracts from the overall elegance of the primary route. The trail seeks to connect mountains with the Long Island Sound; taking a side trip to the river makes no sense in my opinion.  The 60 mile Mattabesset Trail is a worthy, logical route in its own right.

The CT NET Section 8 map incorrectly labels sections of the Mattabesset as the Menunkatuck.  Essentially the Menuncatuck travels South at the junction, and the Mattabesset continues from Middletown through Bluff Head to its terminus at RT 15.

My husband, Scott Livingston and I are giving the full NET a try plus the M and M Trail section from the NH/MA because.....why the hell not? We are starting tomorrow, 6/17/2020 on top of Mt Monadnock. We stashed a cache in 2 spots and a kayak to cross the CT River. We will be self-supported. We’ll let you know how it goes!

Earlier this week, Debbie and I completed our NET Adventure. You can see the full report here. Instead of starting at the NH/MA border, we started at the summit of Monadnock. We felt it was appropriate too begin at the summit. The 18 or so (more like 22) miles of the NH Metacomet-Monadnock Trail is not official part of the New England National Scenic Trail, but it makes logical sense that it would be.

Our official Self-Supported FKT's (so far) no cover the NET Full Trail (MA & CT), and also Connecticut Only and Massachusetts Only. We have to figure out how the route from Monadnock factors in and are unclear if we will push to add this variation. There is some confusion (for us) as there is a separate FKT Route for the Metacomet-Monadnock Trail that includes the NH and MA sections. It stops at the MA/CT border. The NET is supposed to mirror the M-M Trail in MA, but it may be that there are a few deviations. We plan to compare notes (and GPS tracks) with fellow NET End-to-Ender Lee-Stuart Evans.

Our report covers it all, but in summary, this is an amazing trail and we had an amazing journey covering 242+ miles (including our Connecticut River paddling adventure) in 5d, 11h, 46m.

We got great support from many in our our preparation and are happy to share what we know with aspiring E2E'ers.

Tomorrow I will be attempting the first known unsupported time on the NET. I'm starting from the NH/MA border in the am and heading south to the Long Island Sound. TTYL!

Pushing the start back a day. Beginning early Saturday morning

On April 19th, i will set out to attempt the MA section of the New England Trail, unsupported.  i will start at the north end and travel south. Can anyone please tell me how many miles the MA section adds up to? I cannot find the data anywhere, and dont know what program to open a gpx file with.

hey good luck on the run!  a few notes:

- i highly recommend you get a GPX reader (both for planning and for the run).  the NET can be hard to follow in spots, even if you have done all the sections prior.

- the NET in MA has a couple "road walk" detours - those add mileage, but for an unsupported runner at this time of year i don't think you have another option.  water will be cold and it's not a pleasant swim even in the summer.

I will be starting a supported FKT attempt of the New England Trail tomorrow morning (6/18/22) around 5am. I am starting at the NH/MA border and will be walking the Connecticut River detour through Northampton. I will be crewed by my dad and mom and paced for a section by my cousin Joey!