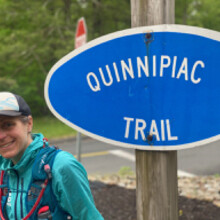 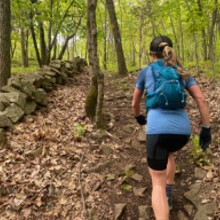 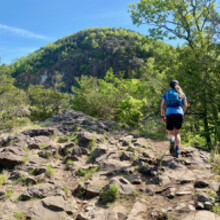 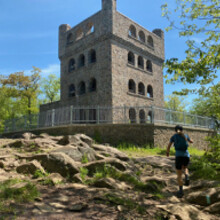 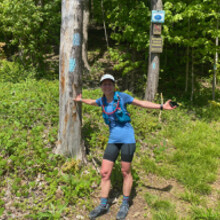 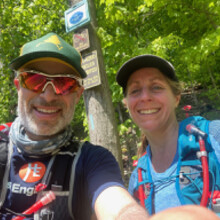 The Quinnipiac Trail is the oldest in the Connecticut Blue-Blazed Hiking Trail System. It measures just over 18 miles with about 4,300 feet of elevation gain on the point-to-point route between Prospect and Hamden. The trail is "New England" rugged, which means lots of rocks and roots on extremely undulating terrain. The traprock ridges that it traverses are steep. When headed north to south(east), the trail passes through Naugatuck State Forest, Cheshire Land Trust land, West Rock Ridge State Park, and Sleeping Giant State Park. We ran it north to south, as many others before us have. We included the initial 0.8 mile road section between Route 68 and the trailhead parking at the end of Cornwall Avenue. The trail marker remains at the junction of 68 and Chatfield Road, it's the traditional start/end of the trail, and despite what is currently posted on the CFPA website, this route was initially established with it.

We also included the the short section of trail that enters Sleeping Giant State Park at the corner of Route 10 (Whitney Avenue) and Mount Carmel Avenue. It goes past the bus stop, turns into the woods, and does a little arc before coming out on Mount Carmel. It is blazed and is part of the trail, but upon further review, it looks like the official FKT route first established on this site doesn’t include it. We didn't notice that until after our run. It is 0.25 miles and added about 2.5 minutes to our time, but we included it in our route. I would rather run a little extra and get it right, than cut it short.

The Quinnipiac Trail is spectacular. Debbie has been running and training on it since the late-1990's. She grew up a mile from the start of the trail in Prospect and her parents, whose Prospect roots run deep, still live there. She has ran it many times, but had actually never gone end-to-end because she had never been past the summit of Mt. Carmel (in the Quinnipiac) in Sleeping Giant State Park, until today. We only saw five people in the first 13 miles, but the last 5 in Sleeping Giant were crowded as it was a busy Memorial Day Weekend during the COVID-19 pandemic. We had a glorious scramble up the "forehead" to the Stone Tower. The last 3+ miles after the tower were as tough as anything on the trail and ended with the spectacular downhill to Old Hartford Turnpike. We started at 7:30 A.M. and pushed it from the start, but still had the energy left to hammer the final section of trail. We had left our bicycles locked to a tree 50 yards up from the southeastern terminus, so as soon as we caught our breath, we rode back to her parents house in Prospect (via the Farmington Canal State Park Trail, North Brooksvale Road, Mountain Road, and Cheshire Road (Route 68). With the run/bike combo, it made for a nice loop. She is interested in trying a future "Double Q" going out and back, but I'm not so sure my legs could handle that. I preferred riding back.