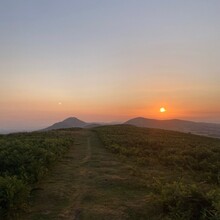 I feel a bit cheeky doing this FKT as I did submit the route! However, there is now a time and somebody can go and beat it. Been running in the Shropshire Hills quite a few times as I was at university in Birmingham, they are beautiful! I am only here for 2 weeks on holiday with the family so I wanted to get this run in before we left. I went in an anti-clockwise direction from Little Stretton. We have been having a heat wave in the UK with an amber weather warning so I decided to do the route early in the morning before the sun could really begin warming things up. Mostly super dry under foot, lots of dew in the shady spots and on head high ferns (I got soaked through). I did it solo and unsupported carrying a gel and 500ml water as there are no taps or refreshment points on the loop. Plenty of streams to cool off in but there are sheep, cattle and wild horses up to the summits so drinking from them is not ideal. Classic fell running terrain and I suffered on the steep descents as I live in one of the flattest place in the UK, Cambridge. But felt ok on the up-hills and managed to keep a decent pace on the long climb up to the summit of the Long Mynd, Pole Bank. This is a variation on a classic fell race route but it adds in a couple of summits, Hazler and Hope Bowlder, and takes out going into the Carding Mill Valley. I think this is a logical and pleasing route around the skyline!