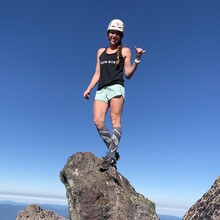 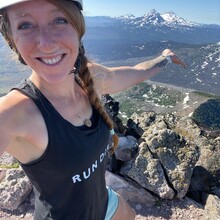 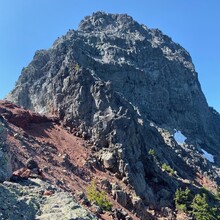 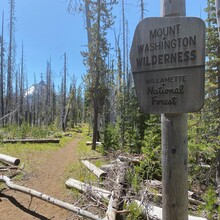 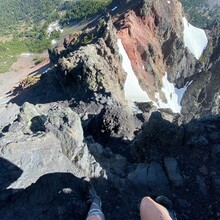 *This was an FKT attempt from the regular Mt. Washington trailhead at the PCT (shown with Mt. Washington wilderness sign) for which no FKT currently exists. The trail from Big Lake is a shorter route (the only other FKT listed) which is currently defunct; the trail sign where this route meets up with the PCT has been removed and tree branches have been laid across the trail for some distance.

My goal was to free solo Mt. Washington from the PCT trailhead, SOBO. After running the three miles on trail I reached the climber's trail, marked by a tall cairn that is frequently re-stacked. I ran/hiked the climber's trail to gain the north ridge (approx 4.5 miles), at which point the trail becomes several social trails which continue along both sides and the top of the ridge. From here, I stayed to the right of the summit plugs. Having been here twice previously and summiting once, I was fairly familiar with the route, although out of excitement I did take one chute too soon and have to retreat losing a little bit of time; I shortly corrected this and recognized the correct chute to the base of the summit block. Here, I took a few items out of my running vest which I did not need and put on my helmet. I recalled the route fairly well, although after the first two tricky moves (the crux and the one class 5 right after), I could not recall the best route that includes the third and final move. After checking a few possibilities, I identified the right route and continued the scramble up to the summit, where I stopped my garmin watch (continuing the strava track for the route down), had my camera timer take a photo of me on the highest summit rock, signed the summit register, and then began the descent. There were two climbers roping up for the climb when I got off the summit block, and I passed one more person solo as I went down the ridge.