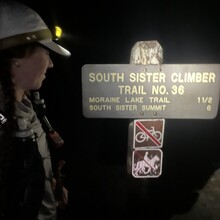 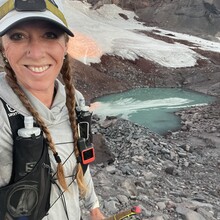 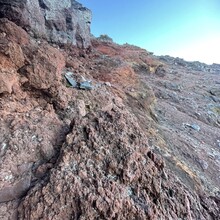 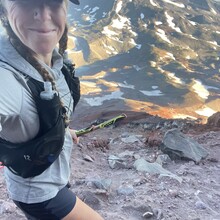 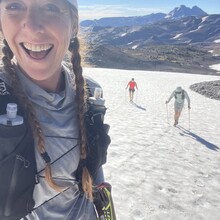 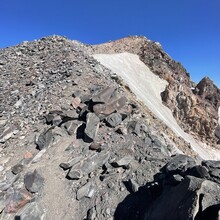 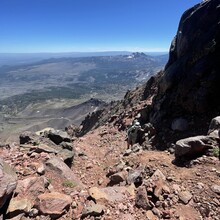 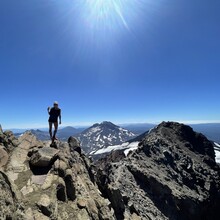 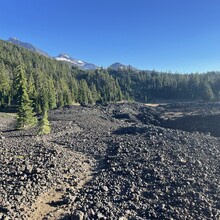 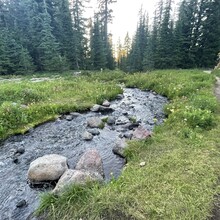 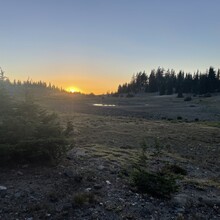 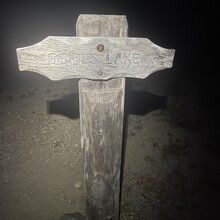 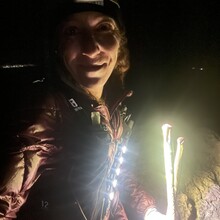 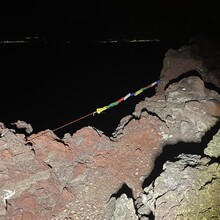 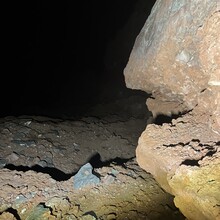 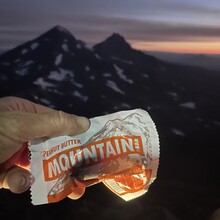 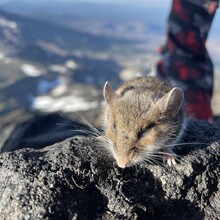 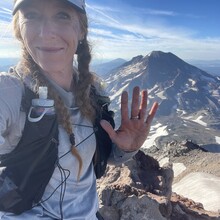 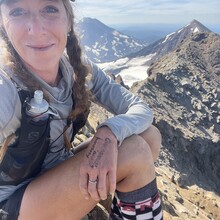 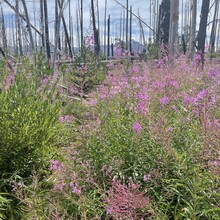 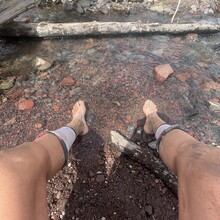 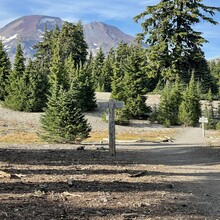 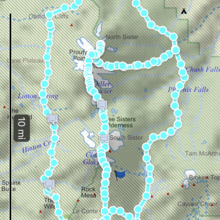 That was so difficult. I think I underestimated how much the climbing would take from my running legs. The mental and physical demands made running hard, so much was power hiking. Also in the dark, I saw more eyes than ever before, some deer but some… other things. So I slowed it down through part of the night run.

I did the route starting South to North Sister, then down and counterclockwise so as to get the longer part of the loop (31ish miles) done. This was wise; to have that left after two traverses would have been devastating. Then another South to North Sister; then clockwise on the loop the other 15 or so miles.

The NE ridge of south sister is by far the most difficult, dangerous part of the route. While less vertical than north sister; the exposure is IMO worse; the rock quality far worse, the both more sustained. Doing it at 4am in the pitch dark was insane, even with my bright kogalla light- everything in my immediate presence was illuminated, but route finding was very difficult because I couldn’t see much further ahead. I would say I couldn’t have done it with a regular headlamp though.
I had two friends join me for the first round of middle and north sister. They gave me a Diet Coke, Swedish fish, and grape leaves. It was great company. We took that part of the traverse slow due to their own injuries, but I was glad because I needed to save my legs and pace myself. After my regular 3 sisters traverse I was so burnt out, and after this first one I felt decent so it worked. It was Erica’s first middle and Alex’s first north ascent. So happy to have shared that time with them.
after we parted, the loop was so long. I had to round the entire north side and then do the whole west. The burn area is much improve on the NE. Opie Dilldock is one of my favorite sections, but in the evening this side was great until dark. The NW section is really beautiful. The climbs didn’t seem so bad after the three climbs earlier that day!

I struggled with being sleepy and trying to move quick in the dark. I couldn’t run too much at a time. My friend Kevin resupplied me- he was going to meet me with my dog Jolly at the base of south, but I was a few hours later than planned so he left a bag with pizza, a rockstar, two kogalla batteries and my kogalla light, some leggings, my bivy, and some more snacks. I used all of these things and they were so important. I slept on the ground next to the south sister junction sign in my bivy after housing the pizza. I didn’t want to continue then, but I knew if I took a nap I could continue, and if I made it up and over south again, I’d likely do the whole route. So 2am brought a hiker blasting music out loud and that was my signal to get moving.
All 3 summits the second round were completely alone. Going down south was scary, middle was annoying but gorgeous, and north was over quick. With no one around I’m always more nervous on that one, but I know it so well now.
running the east/se part of the loop was SO much uphill- I underestimated that. It was difficult. The burn was very hot at 2-4pm. But once I got to Park Meadow I hit some favorite spots, and once to green lakes I was home free. Sat to eat an orange from the resupply bag left at SS junction, and then quick hiked the downhill back to the start carrying that bag. Stopped the watch at the south sister sign.
Would I do it again? No. Hardest FKT I’ve done? For the terrain alone, yes. I’d rather run a 200 miler. This was definitely not a trail run, this route is a combo on trail/off trail total body, total mind challenge of the highest difficulty. Constantly challenged me, huge challenge for my legs, but mentally so engaged most of the time. My coordination and balance definitely decreased over the route, just from exhaustion.

No hallucinations. Besides all the eyes at night, saw deer and a marmot.
Thanks Jason for posting this route.
I’m also very stoked to have the first time posted to be a female time. That doesn’t happen too often and I hope it’s encouraging and shows what we are capable of- this route tested so many things.