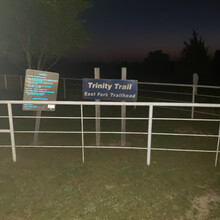 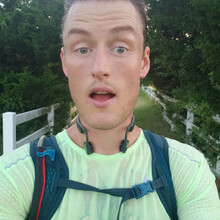 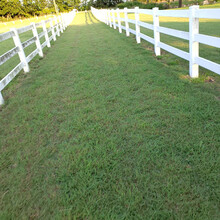 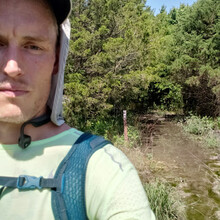 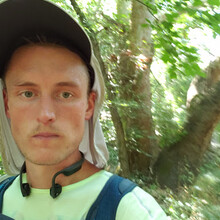 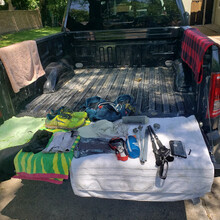 1 copperhead, lots of spiders, and a Heat Index of 105 made for a great adventure on the classic Trinity Trail. I completed the entirety of the trail including the northernmost loop in a one way unsupported fashion. In attempts to beat some of the afternoon heat my trek began right before 0600. The sunrise over Lake Lavon was unassuming and beautiful in its own right. The grass was fairly overgrown (probably due to recent rain), making some of the trail markings hard to see. This caused me to backtrack approximately one mile in total (See gpx file just south of Collin Park and Collin Park to Brockdale connection). There were some downed trees, and standing water in certain spots, but nothing too obstructive. The Champion Sycamore is a sight to be seen and almost felt like a magical moment at that point in my journey. The footing of the trail is what makes it most difficult. As it serves as an equine trail, hardened hoof impressions are are numerous from start to finish. Overall, it was a great day, and I would highly recommend the trail to anyone that is willing.

There was no external support of any kind. I carried all food and supplies with me from start to finish. PB&J, Twizzlers, and Cliff Bars are my fuels of choice :) There is a public water spigot at Brockdale Park that I used to refill my pack per FKT guidelines. Its primary purpose appeared to be used to fill up the Horse troughs nearby.

Thanks to Chris for his previous intel, to the TTPA for preserving it amidst pressures of housing developments, and to FKT for diligently tracking their athletes/ attempts.