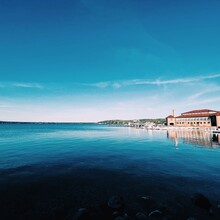 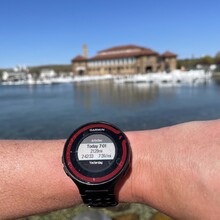 Since last fall, I'd been eyeing to run the Lake Geneva Shore Path. I'd walked the distance with my cousin in October 2020 and knew it was something that I could handle. As I prep for another FKT attempt later this spring, I knew the distance of the loop (~21.3) was what I needed to run today for my training plan anyway, so figured I'd give it a go as an unsupported FKT. I decided to begin my loop in Lake Geneva, which would prove to be a bad mistake in my attempt to run the loop fast. I began in front of the visitor's center downtown and had my start/finish line right before the footbridge by the boathouse. I had my VaporMag pack with me and carried both bladders, one with water and one with Skratch hydration mix, as well as two Huma gels. I also had my phone, keys, and wallet in the back of the pack in case of emergencies, but was unsupported throughout the attempt. In fact, it was a little eerie to not see many people in general during the entire run considering how many houses there are along the loop, but it was nice to not worry about passing people or weaving in between them.

I headed out in the counterclockwise direction, which was the direction I did my walk in the fall and remembered the route based on that experience. The north side of the lake was well maintained in terms of trail/footpaths. I didn't come across many uneven stretches and it was nice to run a little quick right from the get-go. I'd say the first 12 miles were in control and I was feeling good but as I approached the Fontana side of the lake I could feel the wind picking up. Sure enough, as I rounded the corner to head down the south shore stretch from Fontana back to my start in Lake Geneva, I could feel strong, sustained gusts of wind. I knew running fast at this stretch would no longer be in the cards. In addition to a strong headwind, this part of the path had considerably worse trails. Many folks did not have flat paths running through their yards and I found myself running on uneven trails or paths for the majority of the last 8 miles. As I learned fairly early on in the run, this was also not a great time of the year to run this loop because the majority of folks had their docks sitting on the path, waiting to be put in the water. There were multiple properties where I had to navigate around docks that were completely blocking entire sections of the path.

Aside from a slower than desired second half of the run, I felt proud of myself for not falling the entire run (a huge achievement knowing my history on the trails), fueled well with what I brought along, and finished my run in a sprint. I think I had started and ended in Fontana and run counterclockwise I would have run much faster by getting the worse stretch done with first and running fast on the second half. For future FKTers, I'd recommend looking into the weather ahead of time to check the wind speeds because one side will be worse than the other. Also, don't run in the spring as folks have their docks/piers out of the water and covering the trail.