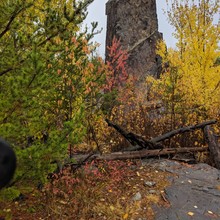 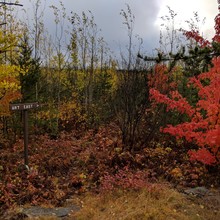 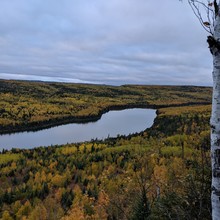 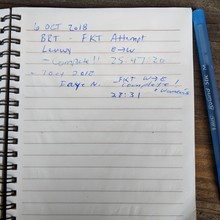 Jeff took off from the east end of the BRT, and I drove around to the west trailhead, which is a little under a 2-hour drive. The gravel roads, some fog, and the fall colors mixed with some snow left over from Friday’s early snowfall and made for a lovely drive. It was drizzling at times on the drive. I made a quick stop by the Gunflint lodge to check for any messages from his inReach as there is not any cell phone access up there (pro tip, you can reach their WiFi from the parking lot). We knew the trail was going to be wet but our biggest concern was tree blow-down as a storm with high winds had come through the area Wed night. Jeff reported that the blow-downs he had encountered so far were manageable and things were good so far. I arrived at the west trailhead and finalized pack items. I had packed on the side of safety: Since this trail crosses the BWCA, there are very few bail out options if things go wrong, and you would have to still get yourself to an exit point if you needed aid.

I took off at 8:39am and soon reached Magnetic Rock. Apparently I liked it so much that I wanted to see it twice… About 1.5 miles east of Magnetic Rock, the trail comes out of the woods and crosses several large rock surfaces. I headed straight across one of these and was having trouble finding the trail. After several minutes of searching, I found a rock cairn way off to the right and went down that way where there was some blue tape on a tree, assuring me I was on the trail. I’m still not entirely sure how this happened, but a little while later I found myself…back at Magnetic Rock! Ugh! As I turned back around, I took out my GPS and would check it frequently the rest of the trip. I estimate I lost about 45 minutes doubling back, but it was a good lesson for me to learn early on; check the GPS/maps often.

The trail was wet, but in pretty decent shape in this area. The wet rocks and boardwalks are always really slick up here, so I always just take it really easy on those. “Safety first” on this adventure. I ran and hiked along and soon found myself on trails around the Gunflint lodge. The BRT combines with some of their ski trail system and then will veer off into the woods. Sometimes it is marked, and sometimes it is not, and sometimes the signs/marks are hidden so it can be confusing (which kind of sums up the entire BRT). The GPS definitely came in handy here. At 12:30 I was on the top of High Cliffs, which is the first really awesome view. The next sections are up and down forested cliffs alternating with prior burned areas. The brush / vegetation in the burn areas was thick, and I went through much of it with my trekking poles in front of my face to block the branches. Gloves were helpful so I didn’t get scratched up too much. I filtered water from Loon Lake and then again at Bridal Falls since it is such a nice spot. I ran into several groups of backpackers and a few hikers in the general area around Bridal Falls, and those were the only people besides Jeff that I saw on the trail. I caught a few more great views from cliffs and then darkness fell. There were still small patches of snow on the trail, and I could see that no one had walked through them yet and was looking forward to running into Jeff. I was around mile 28 when I saw his headlamp coming, around 8pm. We chatted for a bit and checked in with each other and then headed our separate ways. It was kind of fun to see his footprints in a few snow patches during the rest of the night.

The night miles clicked along. I knew when the trail was on the US / Canada border because it was suddenly very wide and clear. A beavers smacked his tail at me probably because he knew I was going to cross over his lodge in 20 feet. The BRT is marked with blue tape on trees every now and then, but the tape was nearly impossible to see at night. Luckily there were only a few confusing spots, and quick checks on the GPS kept me on the right path. I started to encounter some recently blown-down trees as I neared morning, and this was the theme for the rest of the trail. Most were ok to navigate, but I had to bushwhack through / around some of them. Morning brought trails that have been more traveled, but it also brought rain, and then temps dropped a few degrees to around 34 degrees. For the first time, my hands started to get pretty cold because my gloves were soaked. The rain made things pretty slick so there was a lot of power-hiking and not much running through much of this last bit. Then, finally, the finish where Jeff had a warm vehicle and dry clothes. I signed the log book as a completed FKT at this end.

Overall impression: This was harder than I thought it would be, even though I knew it would be hard. In this area, I have done much of the Superior Hiking Trail and did the Kekekabic earlier this year, but doing this trail in one push takes the cake. I agree that a sub-24 hour crossing is possible (especially supported) but you would need the right conditions, the right time of the year, and a lot of volunteer trail maintenance accomplished. That being said, if you want a rugged, remote, bad-ass challenge, this is the trail for you. Additionally, I know I will be adding my name to the volunteer and donor list for this trail. All of the bridges over significant water areas were in great shape, and I’m very appreciative of that.

Temps were pretty steady; I’m guessing they ranged from around 32 degrees to 44 degrees, and I was comfortable until the last few hours. It was overcast with occasional drizzle Saturday and Sat. night, with some clearing in the clouds overnight. Sunday morning started off nice and then it started raining around 10am and temps dropped and winds picked up a bit. Animal sightings: not much as it doesn’t appear many use this trail. I saw about 10 grouse, a few deer tracks, a few moose tracks, no bear scat, a few beaver tail slaps during the night.

I won’t do a full gear list (feel free to ask me), but I used an Osprey Talon 22L pack, which had plenty of room for my gear, food and extra in-case-of-emergency items. I used a 700 mL plastic bottle for water and filtered with a Katadyn 0.5L squeeze bottle. I used a Garmin eTrex30 GPS and a SPOT 3 tracker.