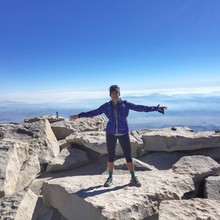 Woot woot! Today was a good day! I was able to run the Mt. Whitney Portal Trail Route (standard route....not mountaineers route) in a total of 5:29:22 elapsed. My ascent time was 3:09:40. The 99 switchbacks are HELL! haha

The only other serious ascent and round trip time I could find from a female, was Kelly Cronin's previous 3:53:50 ascent, and her 7:06:16 round trip (Strava).

I lucked out with a permit two weeks before my trip to the Sierras, so I figured, what the heck! Here is my Strava link: www.strava.com/activities/671664419
It says the moving time was 5:14:24...but being an FKT attempt, the total time which includes photos, refilling water, gear swapping, etc. is included. Thus the FKT time is 5:29:22

I believe I can run this out and back route faster, especially on the return. I had some stomach troubles which I chalk up to altitude. Also, this was my true first time on the route. I had walked the first mile and half a year ago on a whim while I was in town. Knowing the route and figuring out how to beat the belly...I think I could crack 5 on a good day.

Attached are some photos as well. If anyone has any questions, feel free to reach out.