Mount Whitney, in the southern Sierra of California, is the highest peak in the contiguous United States, at 14,496 feet. The peak lies within the John Muir Wilderness and the Sequoia National Park Wilderness. Mt. Whitney is the southern terminus of the John Muir Trail. Mt. Whitney is an extremely popular wilderness destination, and so activities in the "Mt. Whitney Zone" are highly regulated, as discussed on the Inyo National Forest Mt. Whitney website. Permits are required for all ascents of Whitney, and quotas are in effect from May 1 to November 1.

Two main routes have been used for FKTs, both from Whitney Portal at 8374'.  The main Mt Whitney Trail runs a meandering 11 miles to the summit, while the Mountaineer's Route is a much shorter, more technical (Class 4) way to the top.  The track on our map here shows both routes.  Another option is round trip from Lone Pine, which is 20-22 miles each way (depending on route), with an elevation gain of nearly 11,000 feet.  Start and end at US-395.  If once isn't enough, you can also get an FKT for running up & down the Mt Whitney Trail TWICE!  "Knowing what ahead of you the second time up makes the finish that much rewarding. Tear worthy."

Greg Horvath recently (10/25/2017) provided a little more historical perspective (additional info is given by Brett Maune on his FKT page):

In 2002, the community on the eastside of the Sierra thought that Jason Lakey had the record at 2:09. This was generally known information throughout the running communities of Lone Pine/Bishop/Mammoth and confirmed by Doug the owner of the Whitney Portal store. At that time we didn't have GPS watches or at least couldn't afford them. Apparently Lakey had used little postcards that he had people sign on the summit and then return to Doug at the store as proof of his time. That summer I went for the FKT and clocked in at 2:11. Took a few weeks off climbing in Colorado, then came back and hit 2:07 on the ascent. Instead of doing the post card trick I just brought a cell phone and had a hiker speak with Doug over the phone from the summit to prove my time. When I got back to the Portal, Doug had me write a little postcard to put up in the store, which surprisingly remains there today. According to Brett's research above, Dan Howitt bested us both with 2:02 in 2007.

I made a trip up there the last few days to give this another effort. On Sunday came in at about 2:03. Wasn't feeling acclimated and frankly got a little discouraged at Iceberg when I realized I was pretty far off the mark. Took Monday off, and rested as much as I could in Lone Pine then gave it another go on Tuesday. Came in at 1:56:36 on the ascent. A fun day in the mountains and stoked to break the 2 hour mark! Despite the large ice patch above iceberg, conditions are great for doing this right now. You can mostly climb around the ice at 4th class. Its still warm up there, and zero ice above the notch.

Also this is probably up for interpretation, but at least historically this climb has started from the Portal store, but there is also mention of folks starting their watches from the sign or the end of the road, etc. Any thoughts on this? Brett? Matt? Andy? Gina? What did you all do? As the times go down, the differences between runners are likely to get tighter, so 15/20 seconds of extra road running might actually make a difference. Would be nice to have some consistency. My vote is that the segment starts from touching the portal store, regardless of which route you are taking. Hand on the building. Its simple and doesn't require interpretation.

How was your hike today? - Doug Thompson Sr., owner of the Whitney Portal Store

Crazy people don't turn around -- they are too crazy. - Andy Anderson 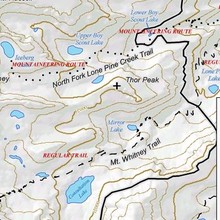 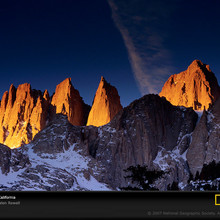 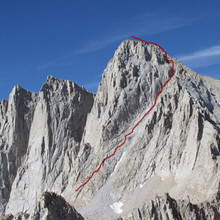 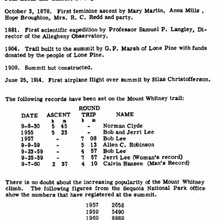 Vernon Morris was a strong mountain runner but I have doubts about his listed FKT on the round-trip on the Whitney trail, posted as 3:20:30.  Vernon and I were running buddies and we raced together in various mountain races back in 1991.  That year he did the Pikes Peak ascent in 2:34 and I went 2:27 in the same race.  I did the ascent up Whitney on the trail in 1991 in the low 2:20s and I'm pretty sure Vernon had told me his best ascent was in the mid 2:20s (we ran it different days).  I don't think it would have been possible for him to go 3:20 round-trip.  I suggest that the FKT is based on Strava/GPS-verifiable times. - Matt Ebiner, Covina, California

Interesting comment about Vernon.  I don't remember where the info about his 3:20 came from.  It would be great if someone could find him & ask him!  Of course we prefer all FKTs to be based on documentation, especially GPS verifiable times.  But, we don't want to exclude the amazing things people did prior to the advent or wide-spread adoption of personal GPS technology.