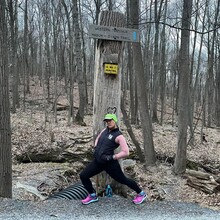 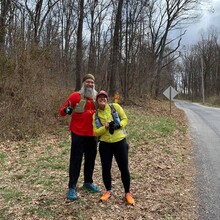 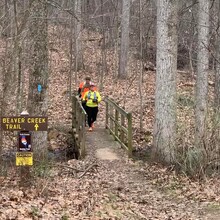 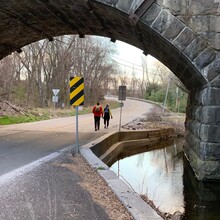 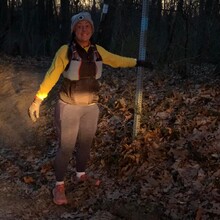 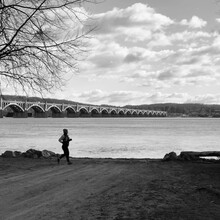 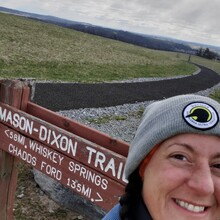 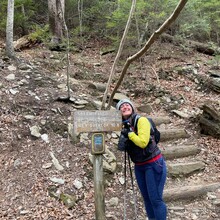 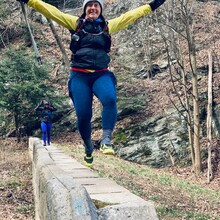 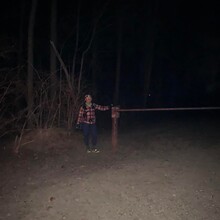 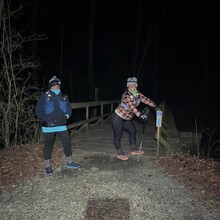 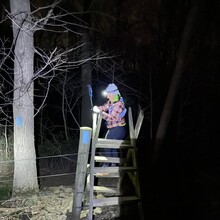 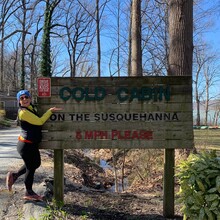 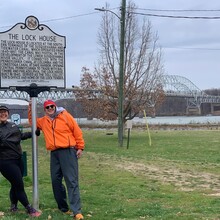 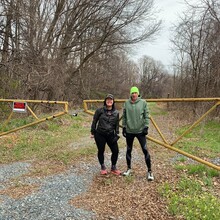 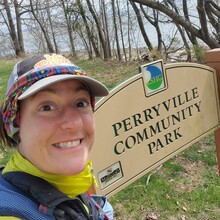 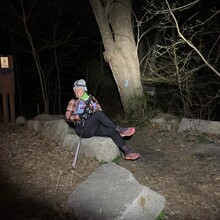 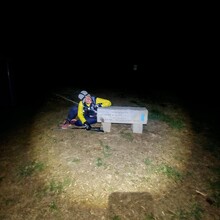 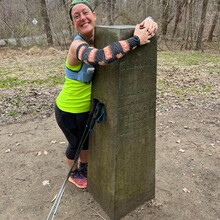 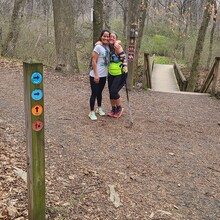 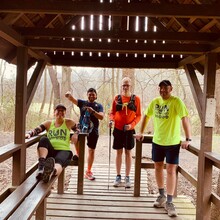 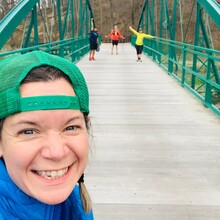 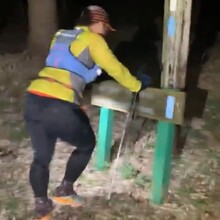 What an awesome adventure!
Started Sunday morning on 3/27/2022.  It was much colder than anticipated, but the cloud cover was nice for the first section since it's mostly road.  Had a lovely day and took it nice and easy knowing I had a lot farther to go.  Picked up first pacer, Jeff, at the Game Lands, then several friends joined at Pinchot - Jess, Julia, James, Amanda, Maeve, and Jeff.  Jeff and I continued on after Pinchot and stopped at Wendy's for a burger, and on to Wago.  Wago was where I had planned to stop for the night, but still felt good so kept going.  Made a slight wrong turn at the farm but recovered quick.  Stopped for the night at the top of Hellam Hills with 47.86 miles for the day.

Car camped for the night and got started solo on Monday morning at sunrise and 24 degrees.  Was really happy to spend some time on trail after tons of road and enjoyed the climb up to Highpoint.  Had a donut at the top!  Still cold and windy but the sun peeked through a bit.  Stopped at Shank's Mare for a car nap before tackling the four big climbs ahead.  Roxanne stopped by to check in then Kiran joined for the next section.  Really happy to have company for the toughest section of the entire trail.  Winds really picked up, and we felt like we were in a thriller movie.  Enjoyed being on so much trail - made my hips happier compared to all the road on day one.  Dropped off Kiran at Shenk's Ferry Rd and picked up Julia.  Shenk's Ferry was the original stop for day 2, so happy to keep going to Urey Overlook where Barb brought me hot chocolate.  Julia stayed until Otter Creek, then I kept going alone until Posey Road game lands parking lot.  Very happy to get that far on day 2 and car camped for the night.

Started day three after sunrise but got some good sleep.  Still cold but sun peeked through quite a bit for this solo section around Lock 12.  It's probably my favorite part of the MDT, so I took my time a bit to savor it.  Got to run for a bit with my head crew, Jess.  It was nice to be with her for some trail time and not just the stops.  Lots of solo time as I continued on through Lock 15 and Cold Cabin.  Temps finally got above 40, but it made Muddy Creek live up to its name.  Saw lots of deer through the power plan section and continued on to the Maryland line.  Angie did a drive-by cannoli drop, and I kept heading south.  The Sheriff's range is another section on my list of favorites.  I love all the pine.  Picked up Kiran at Broad Creek Landing just as it got dark, and we continued on together through the camp, and Glen Cove Marina with some movie re-enacting of Dirty Dancing on the bridge.  The Greenway Trail felt like it was 10 miles long, and I was super tired.  Stopped for the night just after the Deer Creek bridge.

Day four began after sunrise again with some hot coffee and oatmeal made by Jess while I got ready.  I was feeling pretty relieved that the hardest parts of the trail were all behind me and also excited to get to sections that I had never seen before.  Started the day solo but got to see Rob for a minute.  Continued through Susquehanna State Park then on to road.  Rob met me at a brand-new reroute that was lovely and got me off of the road again.  Saw Kathy on the trail for a minute then Sue joined in to give me a huge welcome to Havre de Grace.  Enjoyed my time with Sue then got a ride from Jess across the bridge.  Continued solo through Perry Point with some beautiful views and picked up Kiran by Ikea.  Great company for another road section then Jake joined in on the fun up to Wendy's where I got another burger and took a nap before hitting up Elk Neck State Forest.  Picked up Eddie at the cemetery before the forest.  I was in unfamiliar territory and very happy to have company with lots of time on these trails and in the dark.  It was a nice section and hope I can see it in the daylight some time.  Got a quick car nap around 2am then kept going through Elkton, in to Delaware, and watched the sun rise as we ran through Newark.  Stopped at the trailhead in White Clay for another car nap for about two hours.

Day five started with a breakfast burrito and coffee drop from Steve.  Temps were higher as Jake and I started White Clay, and I finally got to ditch my jacket for a bit.  Christy and Steve made a surprise visit on the trails, and we visited the state markers.  This section was really pretty and got the chance to cruise down some buttery trails.  Jake and Eddie and I then headed on to the long section of roads.  I could feel the finish line coming but knew I still had at least five hours out there.  Roads aren't my favorite, but I did love that they were rolling hills and around beautiful neighborhoods.  My hike was slow, but I was still running dowhills and running them faster as I got closer.  The last section of trail was lovely and hit it at dusk.  Sprinted fast down the field, crossed the tracks, then let Jake and Eddie run ahead while Jess joined me for the finish.  A big surprise was my husband joining for the last mile.  I sprinted fast down the last section and collapsed on the eastern terminus sign.  Done!  This was an incredible adventure, and I miss the trail already.

I got off trail unintentionally only twice that I remember thanks to great pacers.  I went off trail intentionally a couple of times for bathrooms and sightseeing specific landmarks but came back on at the same spot.  Finished with 202.5 miles and 24,607 ft of elevation gain.  On to the next adventure!