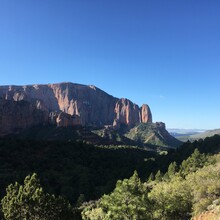 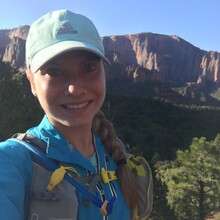 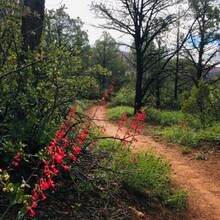 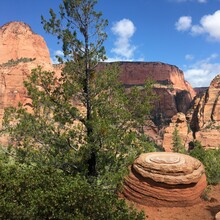 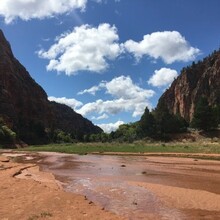 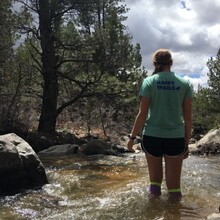 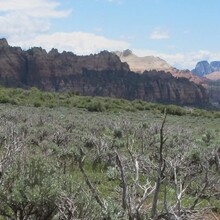 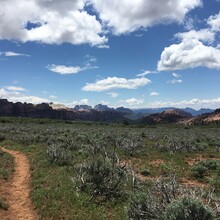 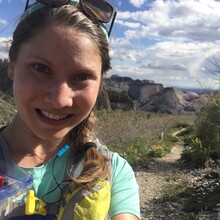 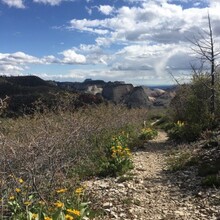 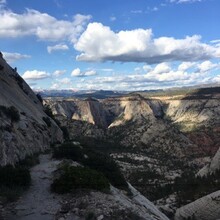 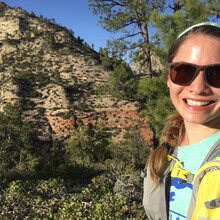 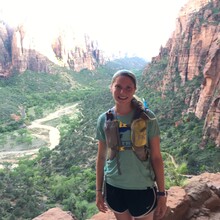 Around 7am on May 8, I got a private shuttle ride from the Zion Visitor Center parking lot up to the West entrance of the park where the driver left me off at Lee Pass trailhead around 8am. I was carrying a larger hydration pack that included a 2 liter camelback bladder, an extra jacket, emergency blanket, Garmin InReach, and an assortment of snacks to sustain me for the day. After heavy storms the night before I was happy to see blue skies and mild temperatures! At mile 6.5 I took the Kolob Arch Trail out and back to see the arch, which was neat. Shortly after that, I passed a father/daughter duo who were backpacking. My shuttle drive had told me I would run into them, as he had dropped them off a few days before and they were camping in the backcountry along the same route I was taking. I watched them successfully cross La Verkin Creek which was gushing from snowmelt and heavy rains the night before, but not too high to be treacherous. It was only knee-high, not waist deep as the rangers at the visitor center warned it might be.

After crossing the creek I went ahead of the father/daughter duo and my footprints were the first ones blazing the trail until I realized there were small paw prints heading in my direction that I was stepping over. Upon closer inspection, I guessed they were bobcat prints! Too big to be fox and too small to be mountain lion. After a whole lot of switchbacks and climbing, the trail leveled out into the Hop Valley, which was one of the most beautiful sections of trails I had even seen! The Hop Creek glistened as it flowed through the valley, surrounded by green grass which contrasted with the steep red canyon walls. I moved slow through this section as I took in the views and trudged through the sandy and silty soil.

A ways later I finally reached the parking lot for the Hop Valley Trailhead and used the pit toilet before continuing on to the Connector Trail. A woman hiker asked me about the distance of the Hop Valley trail and I realized how grateful I was to be able to have seen the entirety of the Hop Valley Beauty, which, nestled in the wilderness area, is pretty inaccessible to the average day hiker. The next section of trail took me through sagebrush fields with snow-capped mountain ranges in the distance and was spectacularly different from the vistas of the red canyons I had just passed through. There were dark storm clouds in the distance and I counted my blessings that the weather had stayed clear so far.

Around mile 17 I stopped at Pine Spring Wash to re-fill my 2-liter Camelback bladder and attached the Sawyer filter to the hose so the water would filter as I sipped from it. I stood in the ice-cold snowmelt water which was so refreshing on my legs! Soon after I reached the Wildcat Canyon Trail and realized I was in the same territory as where I had camped the night before with my backcountry permit. I played leapfrog for a few miles with a troop of boy scouts out on a backpacking trip who were hoofing it, despite wearing large packs! Once further from the trailhead though, I was alone again and it continued that way for many miles as I made the slow grade climb up to the West Rim Trail and above 7,000ft elevation, which was becoming noticeable to this east coast gal.

The West Rim Trail was spectacular and I felt like I was on top of the world, with huge mountain ranges in the distance and the canyons below. This section of trail was so special, as it ran along the ridgeline and was dotted with yellow flowers and sagebrush. I felt so lucky to have it all to myself.

I was expecting that the last few miles of the course, descending into the Zion Canyon would run quick, but it turned out the trail was quite precarious, cut into the side of the cliffs, and one wrong step could mean death. So I hiked down cautiously, but enjoyed every moment of the canyon views, recognizing that most day-hikers don't come this far up the West Rim ever. I got to see snow in the crevasses of the canyon walls, tucked away from the sun. After a lot of switch-backs, I finally made it down to the Angels Landing Plataue in the early evening as the sun was sinking lower and golden light splashed against the East Rim walls. I walked over to one of the overlooks on the Angles Landing Trail and had some other hikers take my photo here. Since daylight was fading, I began the jolting run down "the wiggles", the pavement felt especially jarring to my tired legs. I stopped once more to have a pair of hikers take my photo with golden canyon behind me, excitedly telling them I only had 2 miles left of my run, which had started on the other side of the park 37 miles ago! It was bittersweet to end this incredible adventure, and anti-climatic to finish by myself. When I got to the bus stop at Zion Canyon Scenic Drive I stopped my watch and went to the restroom while waiting for the shuttle. I joined a few other families on the shuttle bus and snacked on my stashed beef jerky and trail mix to celebrate and reward my muscles! When the shuttle dropped me off at the Visitor Center parking lot, I got my car and drove over to the campsite where I set up camp for the night, cooked a big bowl of pasta and tuna, and slept well!