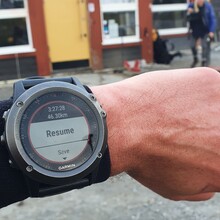 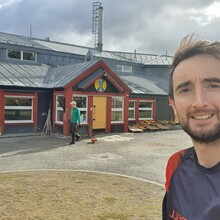 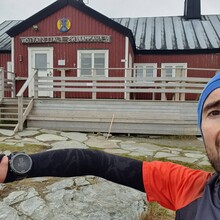 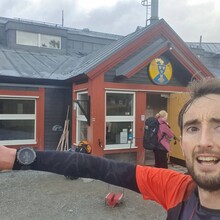 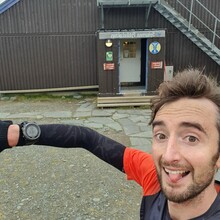 I know many friends in Jämtland who have tried this classic route, and now that I'm a local I thought I should give it a bash myself.

The weather was overcast and cool. Slight north westerly wind of around 10km/h, and it was mostly dry underfoot - relatively at least!

Got the idea for a record attempt earlier in the week. Legs and body were feeling really good off the recent races in the last few weekends, and the weather looked to have a decent window (after a few rainy days midweek). I set off at 11.17am, pushing pretty hard from the start but the legs felt good despite the racing the day before (not to mention the crayfish party..). Pushed well up to Sylarna, but held myself back a little. Then with a headwind across to Blåhammaren, I kept pushing, digging deep and getting there in 2.35h. Final stretch back down to the start was tough, mentally and physically, but I kept good running form to the end. Burst into tears through emotional tiredness as well as physical just after finishing, earning both strange looks and consolations from those about!

Took an empty soft flask, but never filled it up - instead drinking directly from the numerous streams about the hills.

Ate a big, well earned and long drawn-out lunch at the Storulvån Fjällstation after finishing.