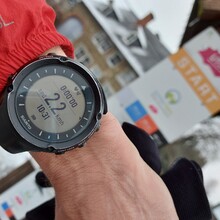 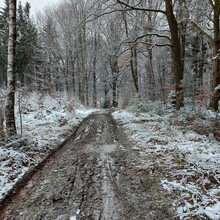 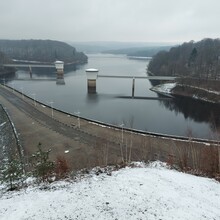 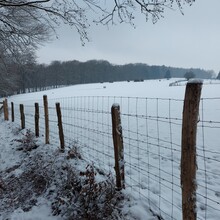 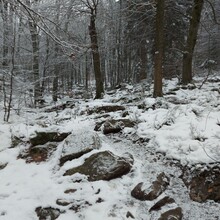 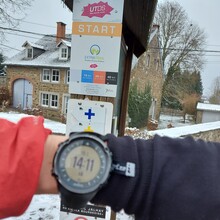 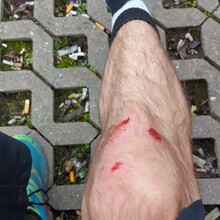 On Friday 15th of January I ran the Jalhay Extratrail black route starting for Sart-lez-Spa.

Due to the snowfall and cold temperatures of the past days the route had become a beautiful snowy scenery. I was really looking forward to my first run in the snow of this year and although the less than favorable conditions I still wanted to go for the FKT. So at 10:30 AM I started rather fast and I running went smooth on the first technical and uphill sections along the Hoëgne and Bois du Moulin.

But after 6 km, almost entering the village of Surister, I was suddenly on the ground. The road was completely covered with ice and I fell on my right knee before I even realized it. Luckily the damage was minor and I could still run, but the self-confidence to run fast had vanished.

From then on I ran with the handbrake on, especially since it also turned out to be very slippery on certain technical stretches due to frozen snow, completely frozen puddles and iced rocks.

But that could not spoil the joy of running in this beautiful area with a variety of wide hiking trails, single tracks and trails with ankle deep mud between the fields and forests around Jalhay.

Especially the part between the Gileppe barrage and Solwaster was an absolute pleasure, only the steep descent at Rocher de Bilisse was a bit tricky due to the slipperiness. Because of my focus on the surface and the fact that the white signboards were less noticeable in the snowy landscape, I had to make a few U-turns because I had missed a turn-off.

And so after almost 3h 40 min of running and gliding I was back in Sart-lez-Spa.