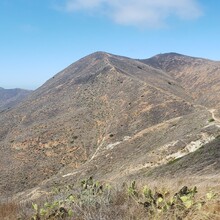 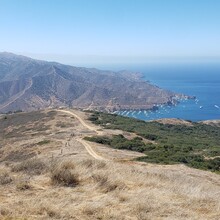 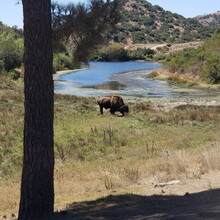 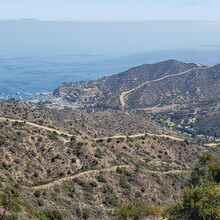 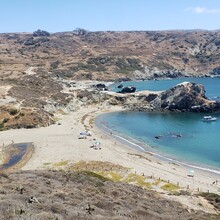 This FKT is set on the official TCT route, per Catalina's conservancy. That means it routes up Hermit Gulch at the start, down Big Springs Ridge instead of Sheep Chute, and most importantly, turns to the coast right before Silver Peak and runs back to Two Harbors for the finish, since Starlight Beach is closed now. This route is about a mile shorter with maybe ~1000 feet less gain than the old route (plus you don't need the trek back to Two Harbors from the finish anymore), but hopefully the 99 minute buffer I put on the last FKT should lay any doubts to rest about it.

Bit of a chaotic day with a good result. Came over after a night of little sleep on the 6AM ferry with a partner who was intending to go for the female FKT, but her shoes were unusable so we had to hang out until 10:30ish for a store to open. I left 30 minutes after her from Avalon at about 11:05AM, day was hot and the first canyon coming out of Hermit Gulch was a scorcher, heat in the 90s. The ridgeline had that constant ocean breeze, though, and the air quality was good (in light of the state's fires), so the day wasn't totally unmanageable. The public taps at Laura Stein, Blackjack, Little Harbor, and Two Harbor were clutch for keeping hydrated and dousing myself in water, and I took a short dip in the ocean at Parson's Landing to take off heat when I was running low on water near the end. Salt water let me know where all of my chafing and cuts were!

Unfortunately, the new shoes we picked up were... not good trail shoes, and she hitched a ride to Two Harbors from Little Harbor after 20 miles to avoid further toe damage, very kindly waiting for me to finish before we trekked back up to the airport to get a ride back to Avalon for the ferry. But we'll be back in the next few months for her time, and I think on a cooler day with an earlier start and some sleep (and maybe doing the route in reverse to avoid the nightmare downhill near the end), I can get pretty close to 6 flat, if not go under. All of the single track is fast and while the steep ranch roads aren't easy on the knees you can put some heat on them.

The new GPX file should be pretty clear as to the official route. There's a couple tiny routefinding bonus mileage spurs, a quick trip into Two Harbor to refill water, and a rather loopy turn near Laura Stein to get the tap as well as avoid the extremely large buffalo parking his ass on trail, but other than that should be easy to navigate from for future attempts. And as always, anyone interested in the route can get in touch with me over Strava or Instagram (@tdiversilobum) for beta. I know more about the island logistics during COVID times than I'd ever wish to know.