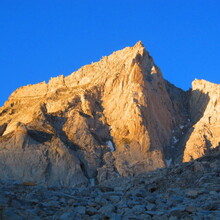 A rather smoky outing, with the large wildfires currently burning around California.

Trey and I began running from the Mosquito flats trailhead at about 6:45 am with a fast pace. I quickly realized that Trey is a fitter trail runner than I am so I dropped the pace back a bit, but managed to catch him because he missed the turn off for Gem Lakes (Lucky break for a gumby like me). We reached the base of the talus in about 0:45 and dropped our poles there. From there we scurried up the rest of the off-trail approach and onto the ridge, reaching the base of the technical climbing in about 1:47. We sunscreened up and ate a snack for a few minutes and then proceeded up the ridge at about 1:50 in. We had just climbed the ridge a week prior so it was fresh in our minds and we managed to reach the summit block by the 2:16 mark. The climbing went smoothly and we knew exactly where to go, opting to meet up with the North Arete route and follow the ridge, instead of sneaking off to the south early. As we reversed the last 30 feet or so down to the scree descent, we realized that we could probably get sub 4 hours if we really went for it, so we started to turn it up. We quickly descended down the scree and talus back to the trail, careful not to bust an ankle by going too fast. We picked up our poles at the base of the talus at about the 3:17 mark and started to borderline sprint down the trail. Once meeting with the main trail we really kicked into overdrive, hoping not to land a 4:01 time. About half way down the trail, we realized we pretty much had it in the bag for sub 4 hours and turned it back from zone 4 panting to a more manageable zone 3 heart rate. We sprinted the last few hundred yards into the trailhead and ejected our poles, hit the stop button on our phones, and sat down in the grass.

For a couple gumbies like us, we were pretty psyched! I bet an experienced/pro mountain runner could take this thing sub 3 hours, and others may have gone faster than us already, but this is the best I've seen with a GPS track.

This is a highly quality route and I’d be stoked to see some truly fast times go down!

600milliliter soft flask with a water filter screwed on

Med kit / knife, lighter, 20 feet of emergency P cord (which I always have)

A couple other extraneous things

Well done!! I just did this in 6 hours and was pretty stoked. The fact that you managed <4 without breaking an ankle on miles and miles of moving talus is amazing ;)

Thanks man! Yeah moving quickly over talus is always a bit of a gamble but we have been practicing the art of talus running recently