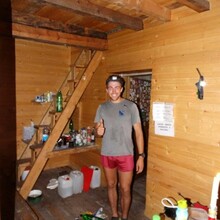 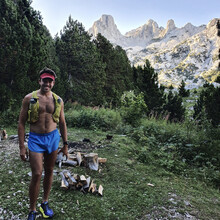 On style: I intended to have this be unsupported but I bummed half a liter off a dude on Zelena Glava, therefore it is self supported. Better than heat stroke I guess.

Finally got this one after a DNF the previous weekend. A very neat route, but honestly fairly dangerous. There is definitely some fifth class on the ascent to the Botini saddle and the ascent to Erac. Erac is incredibly chossy and nasty scrambling. The route is fairly remote and there is no water available for the majority of it. My DNF was 90% due to heat stroke/dehydration and 10% due to horribly spraining my toe descending from Zelena Glava to Botini when I jumped off a rock and landed poorly. There are deep rock “crevasses” everywhere that you could easily fall into and be killed. Further, the rock in general is extremely sharp and a fall would likely be very bloody. The couloir on Erac is especially creepy, descending through it on my DNF I had a boulder hang fire and chase me Indiana Jones style down the chute and on my FKT I was ascending when the scree slope basically slid out from under me. Fortunately I was able to scramble onto the wall of the chute just as about a ton or so of rock and scree cut loose and slid down the hill.

My FKT was on an extremely hot and sunny day. Likely a cooler day would have been quicker. I started with 3 liters of water and 2400 calories, intending to refill water at Jezerce spring and refill food at Vrutak before summiting Velika Kapa. It was so hot I had trouble eating much and probably only ate 1800 calories or so across the entire effort. As I noted before, I ran out of water and fortunately was able to bum half a liter off a dude on Zelena Glava. In hindsight,  I would have started with an extra liter or so. The Jezerce spring is an absolute godsend, the water is plentiful and ice cold. After descending Zelena Glava I took 5 minutes to drink water and dump water on myself. Same after Osobac.

Everytime I did this route I made some on the fly route corrections. This attempt was no different, although I am fairly pleased how the route shook out. I think starting at Vrutak and going to Herac first is a good move. The only issue with this direction is Erac is much slower. Instead of quick descent through the scree couloir, it’s a brutal slog uphill through extremely loose rock. Further, instead of racing up the class 3 ascent on the eastern side of the mountain, it’s a tricky slow(er) down hill. My GPX route is solid and I don’t think there is much room for improvement, save the route to and from Velika Kapa. The blazed trail goes up Kruna on the way to Velika Kapa and the line could be made more direct. While I didn’t summit Kruna, the route could be more efficient. Additional alternative options that may be worth exploring: skipping the ridge traverse (Erac-Botini) and going on the trail through Tisovica both ways (almost certainly slower), skipping the off trail descent from Herac by ascending the trail to Lupoglav and then doing an out and back to Kerac, Vidina Kapa, and Herac, and then continuing either to Erac or Tisovica, ascending Osobac on the via ferrata and descending via the trail (this could be interesting)…..