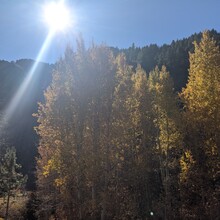 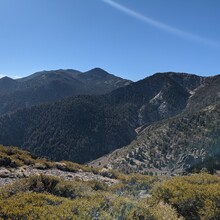 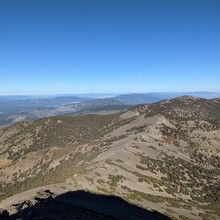 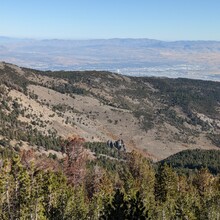 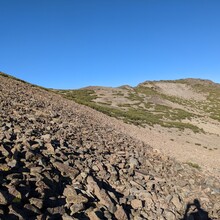 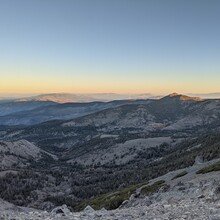 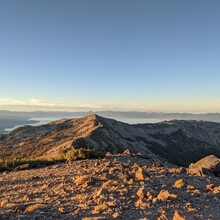 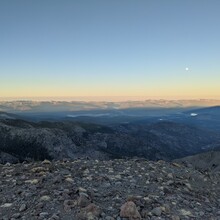 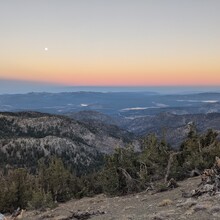 On Sunday morning, November 1, 2020 I set out from the Mount Rose Summit trailhead to attempt the 8 Petals of the Rose FKT. The run began a few minutes after 5am, and I knew that I would be running in the dark for about an hour. On the way to the summit of Tamarack Peak I found a single-track that I didn't know existed so that sped things up for me on the ascent as I thought I would be off-trail the whole way up. I didn't see any single-track to descend down to Frog Pond, so I just pointed myself in its general direction and headed downhill. Once I made it there, it's the usual ascent up to Relay Peak along the service road and the TRT followed by taking the ridgeline north to Houghton. I actually deviated from the ridgeline briefly and slightly over-shot the summit, but I went back to it. On the northeast side of Houghton, there are a number of scree/rock/sand chutes you can enter to meet up with the Mount Rose Trail. I over-shot the chute that I had used on a previous run. I don't think it mattered too much aside from adding a small amount of distance. Once I was on the Mount Rose summit trail it was the standard ascent, and when I summited Rose I was happy that I was making good time.

The summit of Chocolate Peak is one of the more annoying aspects of this route; it's just out of the way and I couldn't come up with a good route to avoid doing a simple out and back. So I made my way down the east shoulder of Rose which I've done several times previously, down to Contact Pass, and made my way up through the mahogany brush to the summit. I was able to avoid the brush on the way back down to Contact Pass by taking a steep, sandy descent route that would have been pretty annoying on the way up. Once back at the pass I aimed for the saddle between Rose and Church for two main reasons: 1 I did not want to summit Rose again on the way to Church, and 2, that route takes you past the Whites Creek spring for a water fill-up. The spring was actually frozen over but I walked over to the ice and broke through with my foot and I was able to fill up my filters.

The summit of Church Peak is pretty straightforward from the south. The descent on the north side of the peak is pretty sketchy and I always make sure to take my time on this section. At this point you have the option to drop down a little further on the west side of the ridge and take the Rim to Reno trail to the north and then come back up the ridge to summit Sunflower Peak. I opted to skip the trail and just stay on the ridge. There were a few spots where I regretted that decision because of heavy brush, but at least I didn't add any extra elevation gain to the route by dropping down to the trail and having to come back up.

After summiting Sunflower Peak I traveled a little farther north on the ridge until an easterly ridge broke off to the right. This next section was one of the worst trail running experiences of my life. The entire ridge was covered by thick mahogany brush and I weaved back and forth from the north side to the south side of the ridge trying to find a good route but I could never find one. From mile 14.5 to 16.5 was just brutal. My legs were cut to shreds by the brush. Once off of Alpine Walk peak I just pointed myself downhill to the Thomas Creek trail and headed for home.

It was a successful day out on the trails, but I'm in no rush to do this route again!