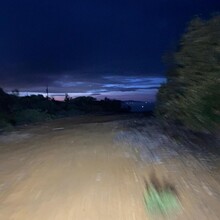 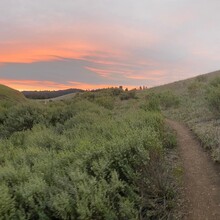 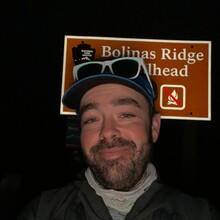 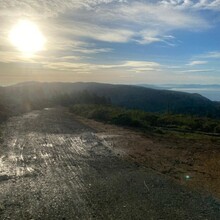 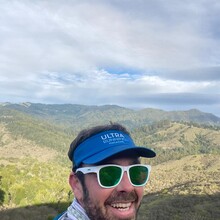 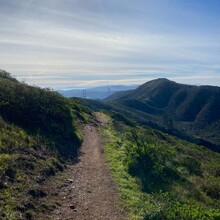 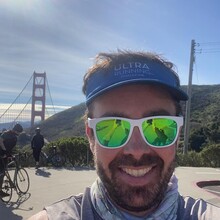 Great day for a run across Marin County!

While I had done this route twice before supported by the Baytrailrunners (and supported another one of their runs too), this time I was going to push hard and see what I had in my fitness at this point in the year. Now, mind you this was to cap off a 70 mile training week as well, so I could probably get a slightly better time.

I got a ride out to the Bolinas Ridge trailhead by my Powerline Wildcat Crewmate (El Cerrito run crew), Doug. He joined me for the first three miles as we took off in the darkness of about 4:50 am. That's a dad's life for you, needed to be home by noon. We started out taking it nice and steady up the gentle hills of the open grassland of West Marin. I have no fear in the dark because I have run 100s of hours in it by myself, but Doug has not and told me it was a good way to face his fears as he turned around back to the car.

I put on the headphones and jammed up the long steady climb to the redwoods. I was over the Bolinas lagoon past Bofax road when the sun finally rose. It was an electric sky with purples and oranges. It brought me some good energy and feels. Then hit the rolling hills of the singletrack above Stinson, this is my absolute favorite part of the route. It's stunning. I passed the car and was halfway in 2:53 (FKT pace was 3:05). I knew the second half is the easier half but would need to keep up this pace more or less to feel comfortable.

My plan was to get more water at Pantol Ranger station at mile 18 but it was shut off. I still had 500ml of Skratch and about 1L of water so I wasn't too worried. BUT, as I made my way to the Deer Park fire road, the water was on at Cardiac hill. I refill my second 500ml bottle and got into a good pace down the hill. The last two mountains to climb on this route are tough punchy climbs. I made my way over Coyte Ridge via Miwok and then through Tennesse Valley and up Marincello. I fucking hate Marincello. Its grade is just enough to be really hard but it's totally runnable a killer combo.

Once I got to the top of Marincello and then Alta, I knew it was in the bag and I didn't have to hustle. The SCA trail to the bridge is one of the most magical is all of California, if not the world. I was vibing big time as I saw the bridge and was pumping Big Wild on the phone. I made my way down the hill and finished in 5:56. I screamed a little and a few bikers looked at me weirdly. This is the finish line of corona times.

I highly recommend this route!