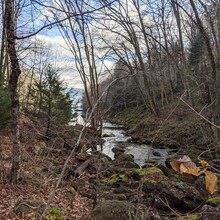 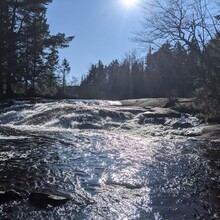 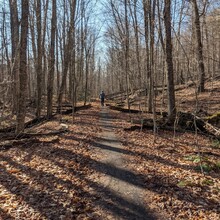 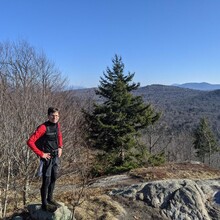 We drove to Arab Mountain first thing in the morning and started up the trail. We encountered a few hikers on the way to the top. From there we bolted into the woods to begin several miles of bushwhack to State Highway 421. The trailless route on our watch was reasonably easy to follow without any significant obstacles beyond the expected occasional creek. We weren’t exactly sprinting through the woods, but it was mostly downhill or flat which allowed us to trot along much of the time. At one small creek crossing a stick whipped Bill in the eye and sent his contact lens flying, never to be seen again. Fortunately he had a spare in his pack. It was mostly dry ground, except for one area where the short pine trees got really thick and the ground underneath became very mushy and marshy. In this muddy, messy area Bill spotted a gigantic white rabbit. He described its size with his hands outstretched as far as they could go. I couldn’t help but picture the white rabbit with spectacles and a pocket watch from Alice and Wonderland and hoped Bill wasn’t just seeing things. But we’ve only been out here a couple of hours, so I had to trust the rabbit was really there. My biggest concern for the bushwhack was crossing Bridge Brook. As luck would have it the brook was true to its name and we crossed where a large mass of rocks stacked on top of the brook. We could hear the brook babbling underneath as we made our way over it. Just before we reached the road we hit a posted sign, and in trying to correct our direction went the exact wrong direction before figuring out our mistake and turning back around. Once we hit the road, the rest of the trip was straightforward, enjoying the hikes up Goodman Mountain and Coney Mountain and calling it a day. The 16-mile trip took a total of just under five and a half hours, after which we got some fantastic pizza and beer at Raquette River Brewing.