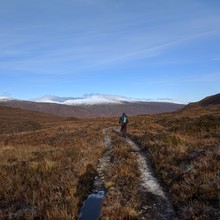 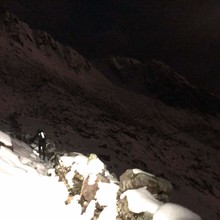 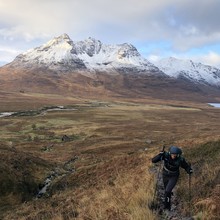 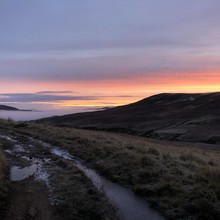 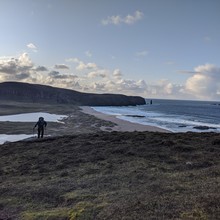 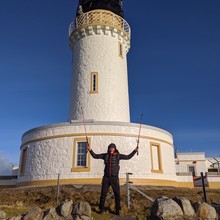 The Cape Wrath Trail is known as being the hardest long distance trail in the United Kingdom. The route isn't waymarked and has many variants/ diversions and alternatives, although the route I chose is known as the Glenfinnan Variant and passes through Glen Cona and Knoydart, rather than the Great Glen. If you are not aware but the word trail is loosely used, as at times there you make your way through true Scottish terrain without any paths at all, just rugged/ rough ground.

After Damian Hall and Beth Pascall broke the record for the trail in December 2018, I was inspired and knowing that I couldn't break the record, I wanted to see how fast It could be done, with the aim of breaking the record previous to theirs (7 Days 9 hours and 31 Minutes).

The attempt was self-supported, with food parcels delivered to places we could collect en route:

Day Six - Knockadamph Bothy to Cape Wrath (124.79km) (Had some food at Inchnadamph and Glendhu Bothy)

The journey was fantastic and the weather was rare for that time of year, with a big high pressure sitting over the north of the U.K., meant that apart from a bit of rain in the first evening the entire attempt was dry and cold, although this did make the ice, snow and -5 degree temperatures a bit more trickier to deal with.

The attempt did begin with my best friend Steve, but unfortunately he had to pull out 158 miles in (4 and a half days) due to s foot injury, although he did finish the final stretch from Kinlochbervie to Cape Wrath with me though, which finished the adventure off perfectly.

Below is my brief summary of the attempt;

"Having had a few days to rest and reflect on running the Cape Wrath Trail, I can honestly say it’s up there as one of the hardest both physically and mentally weeks of my life... yet! ⠀
⠀
If anyone has ever done the route knows the word ‘trail’ is very loosely used, yeah sure there are some good tracks, but mostly you’re moving over rough boggy ground, which takes a lot of effort and zaps all your energy. ⠀
⠀
The weather through the week was fantastic and more so than we hoped for. We had one evening of rain on the first day and that was it! This is Scotland we’re talking about here too... that’s rare! The week was cold and dry due to a high pressure sitting over the north of Scotland ?? The weather did however give some issues, one being cold getting out of our sleeping bag, but the main one being the Ice... everywhere! ⠀
⠀
Myself and Steve Hopwood had a rough plan, knowing full well that anything could happen throughout the week, that plan was to try and get to Cape Wrath in 6 and a half days, roughly averaging about 35 miles a day.⠀
⠀
All started well and did so for the following 4 or so days, but unfortunately Steve’s tendon in his foot was too painful for him to continue, to the point where painkillers became ineffective, I could see this get worse as the trip went on and I truly admire his determination and I’m 100% sure he would have made it without his injury! ⠀
⠀
So 158 miles in or 4 and a half days, Steve made the decision not to carry on, with being just outside Ullapool, this was a wise but very tough decision. After a few hours his mindset switched to helping me achieve my aim of getting to the Cape, which I’m very thankful for ?? ⠀
⠀
I continued on for the last 80 miles or so, getting to the bothy around 6 hours after leaving Steve. After waking up the following day upset and low for being alone, I switched my mind back on and basically kept running for the next 37 hours without any sleep ?.. I don’t know why but I felt fine and wasn’t sleepy at all, adrenaline I guess! Steve met me in Kinlochbervie and we finished together 6 days 9 hours and 32 minutes later ?? .. what a week! ⠀

Thanks ever so much Rab Equipment for everything ??

Also huge thanks to everyone that supported us throughout the week, it was great speaking to people and getting lots of messages off folk too.. thank you!"

Amazing last day and overall a staggering achievement for a first attempt at the trail mostly in the dark. I have the current FKT for the Great Glen variant of the Cape Wrath and would be interested one day in having a a proper crack at the main route. I have done the main route three times including running the Cape Wrath Ultra. That last day of yours has set me thinking the main route FKT is beatable in summer. If you are ever interested in teaming up let me know.