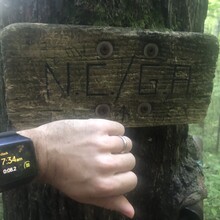 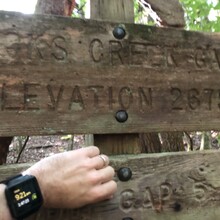 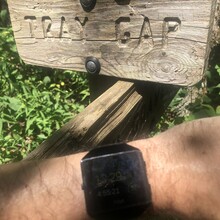 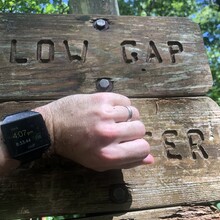 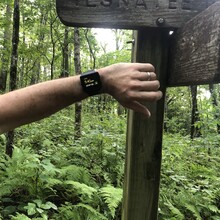 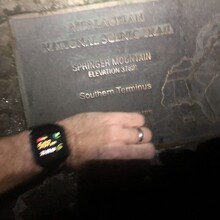 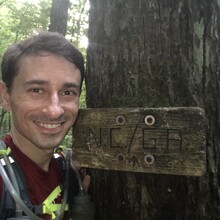 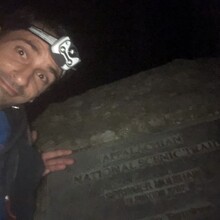 I completed this route in 21 hours 33 minutes, which is not clearly faster than (but perhaps within rounding error of) the previous reported FKT of "21:30", but since I do have documentation for my effort, several friends have encouraged me to submit this anyway.

My wife dropped me just before sunrise on Eagle Fork Road in NC, from where I found the Bly Gap Trail and climbed the ~3 miles up to the AT at the NC-GA border. I saw her again throughout the day at almost every paved road crossing (Dicks Creek Gap, Unicoi Gap, Hogpen Gap, Neels Gap, Woody Gap) and then all the FS-42 crossings as well (Gooch Gap, Cooper Gap, Hightower Gap, and Springer Mountain Parking). She kept me stocked with food and fluids, and I changed shirts, socks, and packs or handheld water bottles several times throughout the day. I never did use trekking poles, which I somewhat regret.

The weather was relatively cooperative for this time of year, staying in the high 70s and low 80s throughout, with scattered clouds and just some very brief drizzle in the afternoon. It did get very foggy in the night hours; between Cooper and Hightower Gap specifically I could only see a few feet in front of me at times. We had chosen a weekday for this attempt so that crowding would be minimized on the trail and at the trailheads, which was effective, as I saw no one else on the trail or parked at any trailheads after Woody Gap.

I had one pacer, Meridith Ussery, who ran with me from Hogpen Gap to Woody Gap. The sun set while we were descending Blood Mountain and with nearly 8 miles to go from there to Woody, we discovered that her headlamp did not work (and I only carried one for that section). But we made it safely to Woody using her phone light until it died, and then sharing my headlamp and phone light between the two of us. I then had a long stop at Woody Gap to troubleshoot my phone not charging (due to a faulty charging cable, of which I had only brought one) and the crew car battery dying.

By the time I left Woody Gap I was on pace to finish in 21 hours and change, so I knew I couldn't afford to slow down in the later miles as prior runners had done. And in fact my legs felt remarkably fresh for this late in an ultra effort, I think because so much of this route involves hiking rather than walking. I was finally able to run more continuously between Woody and Cooper Gaps, but then the fog came in and slowed me down from Cooper to Hightower, which is also a very rocky segment that begins with a steep ascent. But I made up time between Hightower and Three Forks (at least in the second half of that which is downhill) and then ran hard enough from Three Forks up toward Springer to finish several minutes under 21:30. Unfortunately, less than 2 miles from the finish, I lost the trail for 11 minutes; the GPS track shows me going in circles there, looking for the next white blaze. After finally finding it, I sprinted up Springer Mountain (to the extent possible) to finish in 21:33:07.

a bit of a moot point now, since 2 people have bested both our times,

I would have to concede the 59 seconds, since I didn't record things to the second...so I rounded up.

GPS did exist back then, but were far from ubiquitous, and it was common place to claim best times (iirc "FKT" was not even a term yet??) only to the minute.

we both need to get out there and shoot for sub-20!

Thanks Carl and great to see you here!

I always considered your 21:30 the time to beat, prior to Lauren's and Daniel's efforts this year. Tbh I had no idea how stout a time it was when I set out to challenge it... the average pace looks so manageable on paper, until you get out on that mountainous rocky terrain and try to maintain it all day and night. But it was obviously a very high bar, ultimately requiring over a decade (+ a global pandemic-induced FKT boom!) for anyone to surpass.

I don't know if/when I'll ever try the whole section again in one go, but I'm indebted to you (via this site) for effectively introducing me to it and for providing a mark to shoot for, which has brought out the best efforts from many athletes now over the years.