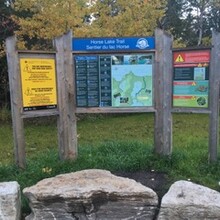 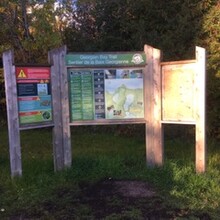 We had a campsite booked at Cyprus Lake campground for the weekend. I could not pass up doing an FKT and putting together a sweet route. We arrived Friday and had to leave Sunday. Friday night I did a practice run of the route which went very well. Except for the rain. I checked the weather and Saturday AM looked like my best chance for a run without rain. I also knew I had to do the route early to avoid foot traffic. This area has gotten so popular over the years. I did the usual sleep in the van the night before and was ready to go Saturday AM. Things actually went according to plan. The temperature was nice and cool with no rain. Although the rocks were still slippery from the rain Friday night. So I just had to be extra careful. Doing the practice route paid off and I didn't have to second guess myself at all. It is well marked but knowledge of the area certainly helps. I ran the best I could while still being careful to not wipe out. My favorite part of the route is when you take the Bruce section by The Grotto and Indian Head Cove. It is a sight to see. I only saw a few people out on the trail, so dodging bodies was a non issue. I of course started at the head of trails and chose to do the Horse Lake loop first, then Marr Lake loop followed by Cyprus to close it out. As stated a in the route description, I fully closed the loops which meant I did Gerogian Bay Trail twice and also a small section of Cyprus Lake Trail twice. I finished up at the head of trails and felt quite satisfied. I highly encourage people to give this a go!