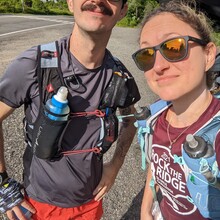 I did this course with my buddy Brandon Vigliante - we parked in the 9W lot and set off!

Going on June 20th, we were guaranteed plenty of daylight. We picked Monday to go because Brandon and I both had the day off. Despite the forecast calling for a mild day, we were met with a very warm day (started at around 60 and went up to about 80 fairly quickly.) We were exposed in the sun especially when getting closer to the summits and we were thirsty. We needed to hydrate especially well, and this was one of our biggest challenges. Brandon carried about 2.5L of water in his bottles and I carried 3L. We both carried electrolytes as well along with our food. We each drank approximately 6L of fluids DURING this run.

There weren't many streams because it's been dry so we were banking on the Historic Museum at Fort Montgomery to get water (right before the Bear Mountain Bridge crossing). However, the museum at Fort Montgomery was closed - and we were beginning to run out of water. We circled the museum and luckily found a spigot where we were able to refill our bottles. We then refilled our water again at Bear Mountain (at the base and at the top.)

We both carried our own food, first aid supplies, etc. I brought candied ginger with me which was probably the best idea I had for an ultra run. I also had some PB&J and energy bites on me. I used SaltStick electrolyte tabs. I also downed a few blueberries from the bushes along the route :)

The first two peaks hit you and the hardest part of them is the way down - as East Coast trails are notorious for - those sharp loose ankle-breakers really make for a challenge This is the second time I've done this route and both times I've eaten it on the way down around mile 5/6. However, lifting your feet a bit more, keeping springy legs, and loosening your hips really helps prevent issues. When it's sunny, it is almost impossible to see the sharp little rocks under the leaf cover because of the shadows cast by the trees so I had to keep reminding myself to lift my feet.

Crossing the Hudson is always such an exhilarating experience (although you are exposed to the sun) and both Brandon and I felt a rush of adrenaline crossing in both directions which helped power us up Anthony's nose and then the stair-master (aka Bear Mountain.) Note: the first vending machine you pass is still on Bear Mountain bridge - skip this one. The beverages in it are hot.

Bald mountain is the last big push up and it destroys what is left of your quads, but that last summit is a breeze, comparatively. At this point, we were tired and going down, I got lazy and ate it again about 1.5 miles from the end. This definitely made me more cautious which was important since the last half mile is all loose rocks on the descent.

In terms of navigation, I used the gpx file included here to navigate with my watch along with reading through the route. The first time I did this, I used a hard copy and it was key to understanding the route. Having done this route before, we ran into only a few issue with trail markings. One was a hairpin turn at the top of Popolopen-Tourne (The Torne). The other one, which I already knew about having done this before so it didn't present an issue this time, was the split on 1777 on a tiny single track trail in Doodletown.

It was a beautiful parking lot and an even more beautiful morning. The temperatures were escalating faster than expected as we loaded our packs.

The climb begins almost instantaneously once stepping onto the blue marked trail. (The Blue Markers have recently been replaced - previously the trail was marked with paint and chalk, now the trail has some fresh reflective blazes). We moved swiftly and consistently up and over the first three peaks with few to none navigation issues except a missed hairpin turn at the top of The Torne resulting in an embarrassing amount of confusion.This was resolved with haste and then we proceeded down to Fort Montgomery.

There was a hose, this brought us joy, it was magnificent.

Fresh legged and rejuvenated we began Act 2 of our journey. We avoided becoming road kill crossing the bridge which is already a big win. Both Anthony's Nose and Bear Mountain are well traversed any day of the week, today was no different. Powering up Bear Mountain gets you a few odd glances, dust them off the shoulders and truck on. The battle is nearly won.

Traveling the ghostly village Doodle Town is fast and down hill. The lack of climbing, sun exposure, and people is very much welcomed.

With every peak climbed and descended we counted down the remaining elevation in feet, but as we hopped back on the Blue Trail and approached Bald Mountain it's as if that number refused to budge. But as you finally merge onto the Red Trail there is a glimmer of hope "3 Miles to 9W". The end is nigh. These 3 Miles are unabashedly unforgiving as the rocks under our tired feet crumble and roll. Jana took a tumble so close to the end and screamed "I'm fine, they're soft rocks!". Alas we finished. Barely banged and thoroughly un beaten arriving at the parking lot was a magnificent occasion.

Be sure to bring chairs to tailgate your next FKT.

Way to go, Jana and Brandon! I really enjoyed both of your write-ups. It's so fun seeing people do this route!