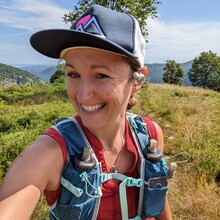 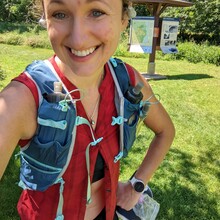 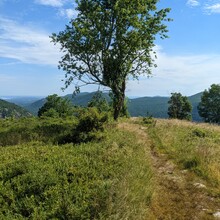 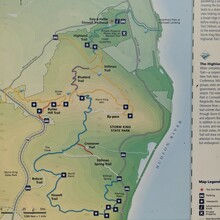 What. a. run! Absolutely breathtaking!

First off, I wanted to address the GPS issue - out of nowhere, my watch started telling I was off track in the middle of run. It was odd because I was following the trail (blue blazes) perfectly and I noticed that it had me somewhere in the Hudson river, which was odd. I even messaged my friends tracking me and let them know I'm ok. The end of the run is also rotated by a number of degrees (from today's Strava, it seems like many people had a similar issue.) I'm more than happy to talk about this or provide any other proof of this run - I had a picture on top of bird's nest which on on the blue trail loop and as you can see I'm at the correct trail head in the other picture with the time on my watch. I would be so sad if this GPS issue would cause me to not get this because this was a hard run - ok, race report time.

This was my first solo attempt at an FKT. I tried this route yesterday, but after going about three miles in, I made an error about a trail and wound up accidentally turning back. I decided that I'm going to tackle the FKT the next day (today) because I wasn't going to let this one go. I studied the map because I didn't want to make the same mistake again. I read the reports of the blazes and what they looked like and I corrected my error of not using my physical compass. I memorized exactly where I was supposed to turn and the corresponding blazes. Thank goodness because GPS was non-functional this morning.

I started out early on Sunday and sent a message to my friends who were live-tracking me for safety. After a short run through a field following a light teal trail, the trail heads to the left and takes on yellow and teal blazes which you follow as switchbacks up the mountain. Note: the map only shows that Stillman is yellow blazed, but the teal blazes continue and it is confusing because they don't look that much different from the blue blazes you see later.

There was some turns that are hard to spot, but the trail is well marked for the most part. I followed these blazes to the ridge and over after which I started my first out-and-back following the yellow trail. This one IS on the state map, but the GPX file here and the state map intersections don't perfectly correspond to each other - so careful with this one! The yellow trail went down to a parking lot and after descending some stairs, I turned back to continue the route. Once I hit the blue trail (it's the loop around one - slightly darker blue than the teal one in the beginning), I kept an eye out for the mysterious "white" trail to the parking lot on 9W. Now, this one is not on the map and can be hard to spot - so again, keep your eyes up so you don't miss this intersection. The 9W lot had stunning views and when I emerged from the forest, I surprised someone at their car because I audibly exclaimed "wow". The view is THAT good! This was the second out-and-back and so then I headed to the main blue loop. This is where GPS started going wild - but luckily I had my compass with me and a physical map, so I had no issue figuring out where the blue blazes went.

I passed over a gorgeous stream - where I refilled my water. It was quickly flowing water fairly high up so I wasn't terribly concerned (don't do this folks...) Is it ok that I'm admitting this? I had 3 liters of fluid that I carried with me, but at this point I was down to about a liter and my front bottles were empty. (I estimate I drank about 4 liters on this run as it was in the 80s and humid.)

Once I got to the ridge or "Bird's Nest" as it's called, I was greeted with another stunning view. Then, I began my descent. The blue blazes are the only way to go, but it was a bit confusing without any GPS working - again I had to depend on my map and compass. The blue trail descends to a road, which you turn left onto for about 30 feet and then another white connecting trail (Stillman Spring Connecting) begins to the left. This takes you up another ascent (this route has a lot of elevation change.) where you reconnect with your beloved blue trail. I said hello to the stream that saved me - didn't need to refill again and continued on. Once the blue connects with the yellow again, you're at the top of the last ridge and it is happily runnable. The last two miles down are tricky because of the switchbacks - some are easy to miss as there are some unmarked trails. I really flew on the descent down - I felt a rush of adrenaline because I had a feeling that I could get this in under 4 hours. Luckily, there aren't loose rocks on this trail, but the single track is a bit tight at times and the larger boulders were slick from rain from the previous day. (I did roll my ankle a little, but nothing bad.)

The only downside was that folks on the trail had dogs that were loose and some weren't able to control them. Otherwise, there were very few people there.