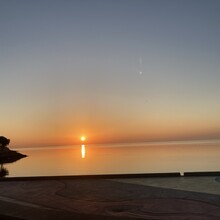 What a beautiful journey from a peaceful sunrise at an empty Candlestick Point to the busy Coastal Trail at Land’s End!

I became aware of this route last summer when it was established, however it felt inaccessible given the length and starting location. When it became one of the routes for the Battle of The Bay (a 2020 virtual event during the time of COVID-19), I decided to start exploring this trail. Little did I know, Sections 4 and 5 of the route are variations on some of my go-to run loops. As for Sections 1-3, I had only run in Glen Canyon and McLaren Park. Given the truly novel route to link the many parks and trails to cross the city, I let go of my normal distain for running on pavement to give it a go. I came to enjoy the variety offered, which made the miles pass rather quickly.

On Saturday December 5, 2020, I set out to break the unsupported FKT of the Crosstown Trail (Northbound). I was intimidated by Matt’s time, but I felt I had some leeway to take it given the construction diversion and wrong turn he faced on Section 3. I intended to set out around 7am for less traffic, but arrived at the trailhead around 7:30am. We (thanks for the ride Emily!) were greeted by a beautiful sunrise on the way over, which was a bit more orange than normal due to moderate air quality from a high-pressure system (mediocre photo attached). Although the park doesn’t open until 8am, I was very appreciative of the porto-potties that were located adjacent to the closed bathrooms. After a brief warm-up, I donned my FlipBelt with a 500ml soft flask with Maurten 320 and two Maurten Gels (one regular and one caffeinated). While running to the start, I got frustrated by the bouncing of the flask in my FlipBelt (I’m guessing this is often dampened when I carry my phone). Oh well, no turning back now! I resolved to drink most of my fluids in the first half.

After taking a moment to look out on the empty pier and colorful sunrise, I turned my back on the bay to head towards the ocean!

The frustration melted away after I started running and focused on the task at hand. I was most nervous with the navigation of the first section and the possibility of a locked gate in the Visitation Valley Greenway (VVGW). I safely made it across the rocky section of the coast and said good morning to some residents sitting out on folding chairs.

I hit the first crosswalk to leave Candlestick Point SRA. Check! I navigated the first major street crossing at Bayshore Blvd. Check! The gate to the greenway was open. Wohoo! As I was exiting the last section of greenway before turning left on Campbell, the gate was closed! WTF, what do I do? Climb it?! Apparently all I had to do was push it open. Phew!

I had a laugh to myself as I was winding back and forth on the final section of the VVGW, thinking about the first time I ran this section with Emily. There are 11 hairpin turns back and forth through the native plant garden. It is clear from the erosion that some people run or walk straight through the middle and cut the turns, but I think that takes the fun out of it! It reminded me not to take efforts like these so seriously, as it is an arbitrary winding path on a run in a winding path of life. This realization made me smile and my steps lighter as I made my way up the hill into McLaren park.

I rarely use hand railings, but they were much appreciated on this first climb (and in Section 3)! I got a honk from a driver as I was crossing Mansell St (many sketchy street crossings were made in this attempt! Do so at your own risk, or just pick a better time) and was flying down Philosopher Way like a man on a mission.

I pulled out my flask and had my first third of my fuel between Mission and Diamond. I reached the end of Section 1 about 30s behind Matt’s FKT, so I was feeling good knowing I would ramp it up in the second half.

Glen Canyon Park was surprisingly quiet. I hadn’t previously realized how deceptively evil the main was path that traverses it. I thought it was flat, but there is a small incline and I was struggling to get good traction on the loose gravel. I continued up the steps, made another sketchy at Portola, then made my way to my favorite section on the trail, the windy Laguna Honda Bike Trails! I took another drink as I was making the first descent from Panorama to the parking lot.

As I prepared to head down the Steep Ravine trail, I encountered closure signs and ropes for trail work. An hour into this effort, I refused to divert. I went around these signs and apologized profusely to the trail workers I passed. Thank you to these kind folks for maintaining this trail! After, I saw this closure was posted on the Crosstown Trail Facebook page, so I would recommending checking both there and the website before making an attempt.

Leaving the dirt bike trails behind, I made my way across the street and to the steps beside the Forest Hill Muni Station. I got a boost of confidence when I saw that I was about 30s up on Matt. I now see this is because he lost time navigating around the construction for the irrigation system upgrade, but I felt good knowing I was ahead and ready to push hard on Section 3.

After climbing the stairs past the Muni station, I took another drink as I ran down Magellan to the first set of stairs. I didn’t want to carry water up any more hills! I felt strong after the first long flight of stairs up to Castenada. I kept pushing down and back up through the San Marcos stairs. I forgot how long the next set of stairs was up to 9th, but I gritted it out with a little interspersed hiking. As I turned onto 14th from Quintara, I got my first glimpse of the headlands, and more importantly, my destination, Land’s End! I pushed on the undulating pavement rollercoaster of 14th and then up and over Grandview Park. As I descended the 16th Avenue Tiled Steps, I took my Maurten Caffinated Gel. I went down 2 steps at a time when I was paying attention, 1 at a time when I had a gel in my face. I was regrettably too focused to look at either of the tiled staircases on this day as I had on my scouting runs.

As I reached the end of Section 3, I had a solid 3min gap on Matt’s effort and I was heading into the Sections where I was most comfortable. Things were falling into place!

I made it across Lincoln and MLK (phew), around Strawberry Hill, and down the ramp east of the Stow Lake boathouse. As I was making this turn, a group of ladies cheered me on and yelled “CROSSTOWN!” This gave me a boost of energy as I pumped my fist (THANK YOU!!!). I had a close call sliding on a leaf covered root on the trail past the Pioneer Log Cabin, but I stayed on my feet.

As I passed through the Rose Garden, I could tell that the light was already green and that I wouldn’t make it. There was about 10s on the walk sign when I arrived at Fulton. I thought about pulling out my water to finish it off, but there was too much of a sense of urgency to keep moving. After the last car went by, I bolted across the intersection, surging to follow the light cycle. All of my crossings were pretty easy until Geary where I weaved left and right around the passing cars.

I didn’t pay attention to the splits for the last two sections, but felt confident the FKT was mine if I kept pushing.

I continued surging based on the traffic cycles and took my last bit of fluid as I was approaching the crossing of Park Presidio at Lake. I bounded down the Lobos Valley sand and then to the boardwalk, which was wet with morning dew. This boardwalk is always slippery, but today was worse than normal. I tried stepping on both the boardwalk and the raised edge to get extra turning power. I didn’t fall off! I crossed the last busy street, went down the sandy path to Baker Beach, and passed a large group of tourists on the stairs up to 25th.

As I reached China Beach, I looked down at my watch and saw 1:32. I knew the Coastal Trail through Land’s End was about 1.5mi and I still had a little ways to get there. I had to move now!

I entered a busy Land’s End and saw a runner approach and walk behind a large group of people at the first set of stairs down. As I approached I yelled “RUNNER!” at the top of my lungs and they parted like the Red Sea. I thanked them and continued moving with a rush of adrenaline. (I should use this word more often, it seems to work better than “Excuse me.”)

I picked up the pace as best I could in the final mile, but I’m sure I would have had a stronger final kick if it were a real race. As I reached the final descent down to the parking lot, I was elated to see the visitor center marking the end of the trail. I ran through the line taking a split and stopped at the bottom of the steps, yelling in joy with what I accomplished (WOOOOO!)

I could feel tightness in my right hamstring from the journey behind me, but it didn’t matter. I turned around to head home back the way I came…

Thanks Matt L. for putting up a stout time and making me dig deep. Who’s next?!