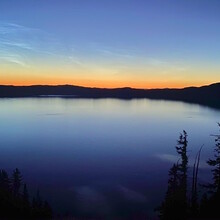 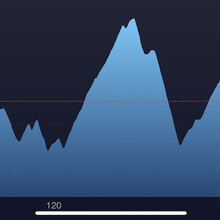 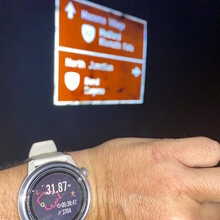 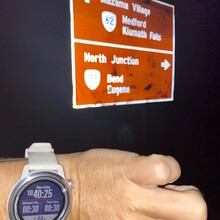 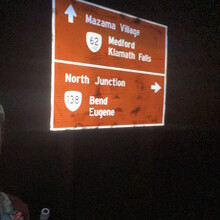 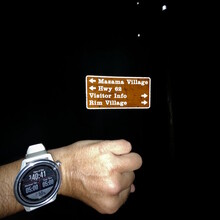 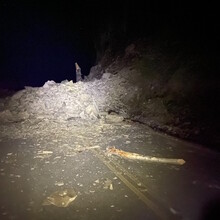 I chose to start the route at Rim Village for secure overnight parking at the lodge. I started at the entrance to the village on Scenic Rim Dr at the signpost at 10:40 PM and traveled CW using only the paved road and the entirety of the road for a complete loop. I ran solo and unsupported carrying three 17 oz flasks and gels/snacks. I used a waterfall on the south rim for a quick cold refreshing fillup of water. I opted for a night run to limit traffic exposure and the hot 75-80* days this week. The skies were clear and I had full view of the stars and Milky Way. The west rim was open to traffic but I only saw one car. The north/east rim was open to ped and bike traffic. The south rim road had several snowy sections and much debris from rock slides. One very large rock slide required a careful traverse. I expect the snow to be completely melted by July but the rock slide and the many sections of rock debris may take a bit longer to clear. But the route is traversable.

2 or 3 grey wolves. I caught a detailed look at the body of one. Larger and furrier than a coyote with a broader snout. White/blue eyes. The first 2 stood their ground and watched me closely as I passed. Larger than a coyote or fox. My experiences with coyotes and fox is that they'll scurry away to a safe distance. The third was farther away but had the same eyes and behavior.

7 meteors, 4 planets (Jupiter, Saturn, Mars and Venus) as well as the multitude of stars. 1 pothole, which I only saw after I stepped in it.

This was an incredible run and I thank the creator for inspiring me to do this loop and experience the quiet and solitude of the cosmos and nightlife of Crater Lake.