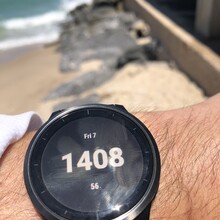 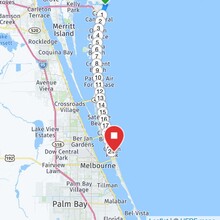 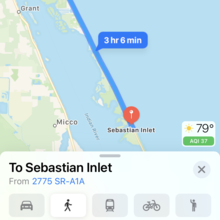 My first attempt to complete Ais Island from end to end failed due to beach replenishment at Patrick Air Force Base. I ran from Sebastian north with support from my wife bringing me food en route. I learned that beach replenishment ends during Sea Turtle Nesting Season (May-October), so I planned my next attempt for the first weekend in May. After the first aborted attempt, I determined I could complete the route without support, as there are many rest stops with water fountains along the route. I had my wife drop me off at Jetty Park in Cape Canaveral and proceeded to the Jetty. I began running May 07 at 0530. I ran the first twenty miles without issue and stopped to refill my water bottles at a park. I did not stop my Garmin intentionally, but somehow it did stop and switched to Treadmill mode without my knowledge. I continued the route, mostly walking, until I arrived at Sebastian Inlet at 1408 where I called my wife for pickup. The total time was over eight and a half hours, so this should be an easy FKT to beat. I carried four water bottles filled with Gatorade slurry and Gu energy packs. I filled the water bottles at a rest stop with water only. I also brought several Cliff Bars. I coordinate a weekly beach run for the Space Coast Runners and am challenging my fellow beach runners to capture this FKT. So far, no one else has attempted it, but I am confident someone else will as I will volunteer to either pace or support. We have ultra-runners in our club who have competed at Western States &c, so when they retire from that level of event, this type of race will be appealing.

Hi Jeff - Great run & route! I’d love to give this a go myself. I’ll be in the Cape Canaveral area the last week of July. I’m curious to hear your thoughts on it and ask some questions. Let me know if you’d be open to chatting. Cheers