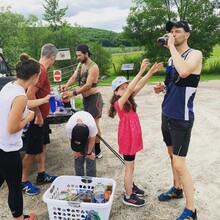 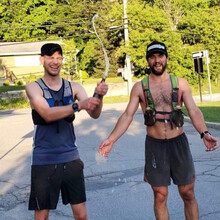 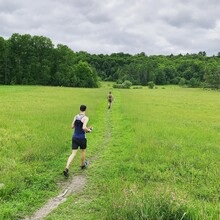 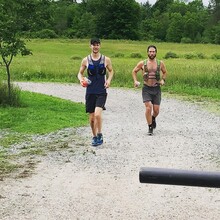 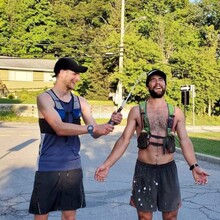 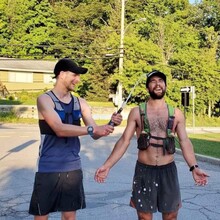 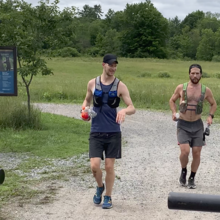 Refer to this google slide for much more information and pictures

This google slide has our prep notes and I'm still working on the full report of the whole run. It was pretty epic for us, so I'm still recovering and also trying to capture all of the small stories.

What did you do, and how did it go?

We pretty much decided then and there, that it would be our next challenge in July. The Gatineau Park It is a special place for us. We'd never run over 72 km. Which was our last real ultra we did in the Prescott-Russell trail. The difference with that course is that it is completely gravel and flat heading due east. So were had way more elevation gain here.

We started at 5:30ish AM and ended up doing the 111 km loop in 14 hr 17 minutes. Pat Lalonde and Jeff Harvey ran together the whole time. Pat was navigating. He would push the more technical tracks and Jeff would work the speed in the open wider segments. Pat had poles for the climbs. Jeff preferred to stand tall, he's 6'5" already, and engage the glutes while climbing instead of destroying the quads. We had Mike (Pat's brother) follow us on a bike. The terrain was so gnarly before and after Luskville falls that he was not really able to help us there and the bike did not help us too much. When Mike caught up with us again around 80 km in all the up and down hills broke his bike. It just collapsed in a farmers field.   The run went really well. Pretty much on pace we had planned for 13:30 as a goal but I forgot to include aid station minutes so in general we were right there. Keeping the HR below 150 on the hills and usually hovering in the 130-140 range was prime and so the only issue would be muscular fatigue. But given our nutrition was so spot on it felt great the whole time. In fact when we got to the finish Jeff almost contemplated continuing, but that thought quickly vanished as family was waiting for us to celebrate the day!

Did you resupply with food and, if so, how? Where did you get water?

Yes we resupplied with food and water, from a truck Pat's wife was driving and meeting us at various parking / check points (shown in the google slides).  We both carried soft bottles and or gatorade in our vests or hands between stations. We mostly ate cliff bars, gu's and some homemade wraps. Pickle juice and Coke were key when we arrived at Taylor Lake. Jeff also changed his socks at this point, which was an amazing feeling to run with dry feet.