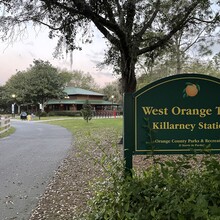 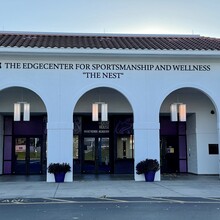 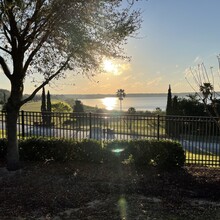 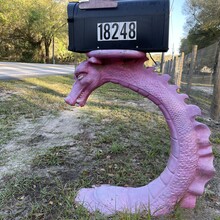 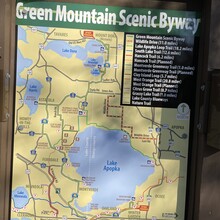 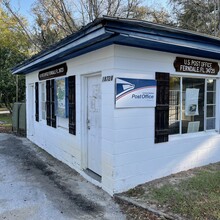 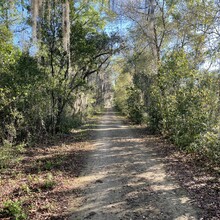 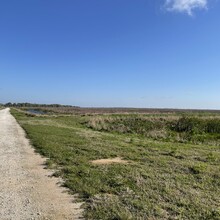 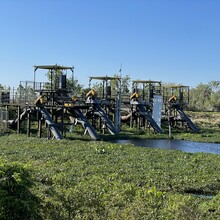 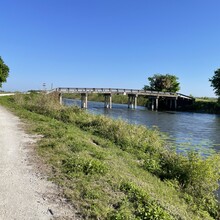 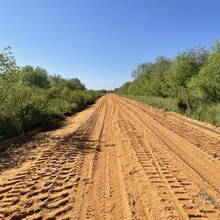 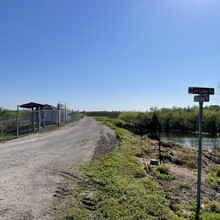 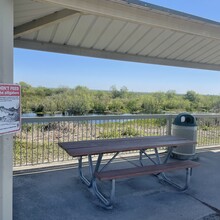 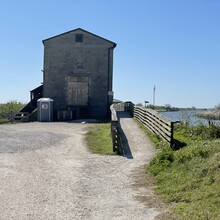 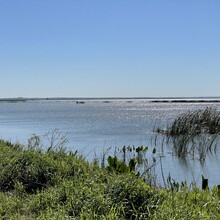 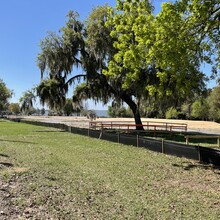 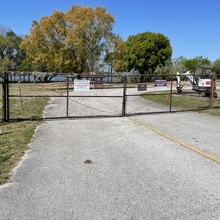 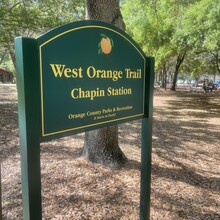 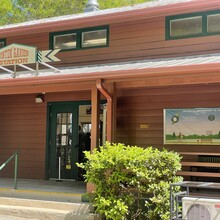 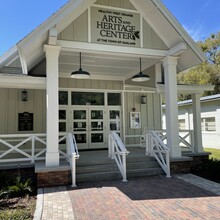 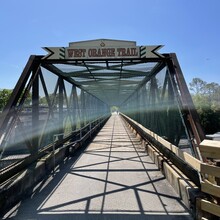 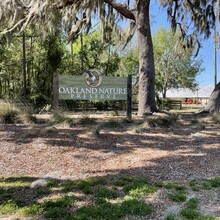 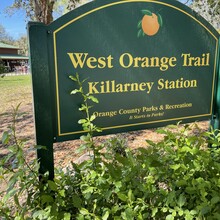 I woke plenty early, but probably dawdled a bit too long at home before getting on the road for the hour-and-a-half drive to the start at Kilarney Station. When I arrived, I didn't want to start in the dark, because I wanted to be seen by the road traffic, and not need to carry a light and reflective gear. But the daylight in the spring seemed to come more quickly than it did in the fall when I was last here.

For this unsupported attempt, two liters of water in a hydration bladder and my vest packed with food made for a heavier than usual pack. I also wore a waist belt with my phone and a water bottle with no liquid, but just a scoop of electrolyte fuel. I planned to fill the bottle twice during the run from water fountains at two different public parks. It was a cool morning start (low 50sF/11C), but I knew it would be warm in the middle and later parts of the run.

So, I snapped a photo of the Kilarney Station sign, and started my run at 6:45 AM. I left the paved greenway almost immediately, onto the high-speed two-lane road with no sidewalks. I wanted to get this section out of the way first, in the early morning, to limit my exposure to the vehicle traffic. Having done this section twice now on foot and once on bike, I think this strategy is sound. If I must be around traffic, I want it to be when I am most alert, and when the traffic is lightest; not later in the run when I'm fatigued, nor later in the day when the traffic is likely to be heavier. When I saw or heard vehicles approaching, I would move off the pavement whenever possible, but there seemed to be more than the usual occurrences this time of vehicles coming from both directions at the same time.

This is also the "hilliest" section of the route, with rolling hills up to Green Mountain Trailhead (GMT), so it's nice to get it out of the way first. As I climbed the first few inclines, I was a little late to catch the actual sunrise this time, but it still made for a pretty view.

I arrived at GMT, where I'd planned to use the bathroom and fill my bottle. The former completed, I elected to skip the latter, as I hadn't used much water yet, due to the cool morning weather. (Note for next time, maybe carry one liter instead of two in the hydration bladder, and fill the bottle here. But, really, the time of year/heat of the day will dictate the hydration strategy) So, I snapped a photo of the trail map, and began the descent to the lake. And what an amazing stretch of downhill this is. It's a really pleasant, gradual two-mile descent down to the level of the canals and lake, although there are some very slippery spots on the packed limestone that stays moist under the shade tunnel created by the overhanging trees.

Down at the level of the canals and the lake, you are out of the shade tunnel, much more exposed. It was a bit windy, as I knew March would be around central Florida. The wind seemed to be coming out of the NNW, as best I could tell. So, any time I had to turn north, I was heading into the wind. It wasn't so stiff as to be overwhelming, but a few gusts seemed to "stand me up on my feet." Roughly speaking, miles thirteen and sixteen were heading directly north. It's also at this point in the course that you begin to experience the abundant bird wildlife that this area is known for.

After heading north for a mile and a half through mile sixteen, you come to the bridge to get you across the canal. After crossing the bridge, the gravel road continues straight and then turns south back to the lake. You can take that, or, right after the bridge, you can turn right on a grassy "road," and take that instead. I took the grassy road (which is the course I'd mapped-out originally, online), and got to enjoy a strong tailwind for three quarters of a mile as I headed back directly south toward the lake.

Just before the lake, the route turns directly east, and I learned very quickly that the NNW wind was still going to give me a gentle push all the way across the north side of the lake. A good thing, if you have the fitness to keep up with it or the presence of mind to relax your effort and enjoy the ride. Today, I had neither, apparently.

By this time, it had also begun to warm up, but I hadn't really noticed yet, because of the near-constant breeze. Also, this part of the route, from the west side of the lake all the way to the east side is fully exposed. Not taking all three of these factors into account, I got too far behind on my hydration, which I would pay for later in the run.

On the north side of the lake is where the bird life peaks. It really is spectacular the number of species you see and hear. You also encounter some minor, slow-moving vehicle traffic on the one-lane gravel road, from the bird-watchers who come to the area to catch a glimpse of the wildlife with their binoculars.

Along this stretch of the route is where I passed the marathon mark. It should not have had any relevance at all, but, for some weird reason, my head was saying it wasn't a very good marathon time for me. Probably the lack of hydration and nutrition and the extra effort I'd put in with the wind messing with my head, as it made no sense at all. This was to be the beginning of the physical and mental decline that would plague me for the rest of the run.

Coming to the end of the gravel trail that goes all the way across the north side of the lake, I came to a closed and locked chain-link fence. What in the world? I found the well-worn path into the swamp a bit and around the end of the fence. I look back at the sign on the fence, "Trail closed due to construction." There had been absolutely no signage from the way I'd come. I guess they hadn't planned on people approaching this point from the other direction, which would have meant traveling several miles from the point where the birder vehicles came in, or all the way back to GMT, or, in my case, twenty-eight miles from where I'd started at Killarney Station.

I continued on, now on the paved greenway trail, knowing that my water refill point was just around the corner. I had to dodge another construction sign, and I encountered a couple on bicycles coming toward me, who stopped to ask what was going on with the trail, and could they get through? Apparently the notice about the construction didn't get distributed very widely.

I continued on, and, wait...another locked chain-link fence? This one was at the greenway entrance to the little park where I had planned to refill my water. Peaking through the construction fence, I could see the entire park had been wiped out. The water fountain and bathrooms that were there the last time I'd come through? Gone. The entire park was being rebuilt with new facilities. Well, it seemed like this run just got a little harder, as the temperature was headed toward 70F/21C at this point.

So, I hopped onto the road for a bit, proceeding to what was the vehicle entrance to the park. All locked up and the entire grounds had been flattened. I looked around, and, finally, noticed what I hadn't seen when we had stopped here on our bicycle trip around this loop--that this park also extended across the street (and, more importantly, wasn't under construction)! Woot! Maybe I could find water after all. I trotted across the road and entered the park, looking desperately for a water fountain. Nothing that I could see. But, over there a ways, was what looked like might be a small bathroom building. I headed over. Bathrooms, yes, water fountains, no. I used the bathroom, washed-up, and filled my electrolyte bottle from the sink. Grateful, I made my way back to the route and pressed on.

A few miles of road-running and sidewalk running here, to re-connect with the the next section of the greenway, but, then, I knew it would be greenway all the way back to Killarney Station. Unfortunately, this entire rest of the run was an absolute slog for me. I couldn't get out of my funk, no matter what I tried, and it took all I had just to keep moving forward. Which is a shame, because there are some nice "little town" sections to run through. I tried to remember to snap a few photos just for documentation.

In the middle of the run, given my pace at the time, I'd fantasized a finish time near six hours. In a rare moment of lucidity, I had adjusted that to be more likely six-and-a-half hours. With the wheels having fallen off, I was well beyond that now. I'd pulled up Google Maps more than once during this final slog to see how far I had to go. The first time was four miles. And then, at a couple points, I couldn't get any signal, which was strange. Now, just .7 miles to go. And, look, ten minutes to do it in to break seven hours and thirty minutes. Could I do that? I really don't feel like it. But I ought to be able to do that. I broke into a "run," and got it done, at 7:28:17.

There aren't too many runs I've done where I was this glad to be finished. I crawled into the back of the car and took a nap. It seemed like it took a long while for my system to stabilize to the point where I felt like I could continue on with my day.

True to my past experiences, it seems, even with a course preview on bicycle, and a preview run on the first ten, out and back, it takes me more than one completion to figure out how to run a course. Well, at least I set the bar low enough that it shouldn't be much trouble to improve upon it in the future.