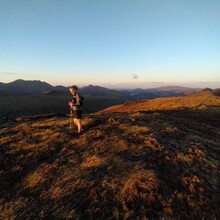 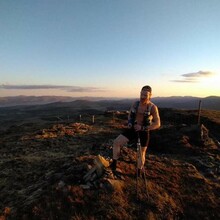 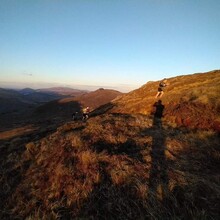 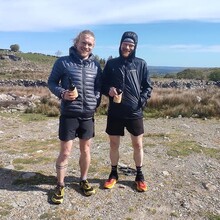 Making the most of a short weather window, we headed of at 11am on a bright, sunny Thursday morning ,with a temperature of about 6 degrees and a northerly 5m/s breeze. The first 4 summits were bagged in quick succession and before we knew it, we were at the first properly difficult bit. Described by accomplished mountain runner Brian Mullins as "..akin to Dante's Seventh Circle of Hell" and "indescribable, you have to go experience the horror for yourself",an early short navigation mistake after Coomcalee(4) nearly turned into aforementioned hell but we promptly retraced or steps to find an easier route with only maybe 10 minutes lost at most. Our stop at Coomura (9) saw neither support crew not event photographer as we were already an hour up on schedule. A few texts rearranged for a meeting at Beann South (16) where we stocked up on fresh water and some food. Mullaghanattin(20), proved to be not as difficult as previous outings due to or new knowledge of the descent to Bealaghbeama gap. This section was instrumental on our starting time so not to have to attempt the dangerous climb down in the dark. At this stage, we were 2 hours up on estimates. This was also our first proper crew stop. Jack Murphy joined us for the next section towards Stumpa Duloigh SE (25) for the next quick crew point where we picked up Mark Nolan and Conor Murphy also until the bottom of Bascadh. Dust was beginning to fall by Bascadh West(27) and it rapidly became bitterly cold without the sun. Cnoc na gCapall (29) saw Simon Kelly join us just as darkness arrived. Another very quick hello to the crew before ascent of Doire Garab(31) and the more leisurely stop at Molls Gap. From here Simon and Stephen Mangan and Harry Clifton tagged along, starting with the short tarmac transition towards the first of the Peakeens (32), followed soon after by Nw ,West and the main Peakeen(35). The descent of Peakeen was steep but well defined and easy to follow ,or so we though as it turned out we were slightly too far towards the Kenmare side but it wasn't an issue and was possibly a touch faster due to the better terrain. Knockanaguish (36)  was a steep climb but quite a nice one i thought, but from here on to Mangerton was horrid! Featureless bog and shite, boulder fields, tussocks and wee small lakes made the going slow and arduous. The first light of Friday outlined the Mangerton(40) spot height, and beyond it the North Top (41) stood as our next destination in the bitter sub zero morn. As the sun emerged, Stoompa (42) was in our sights and some of the most spectacular sights of the traverse, but the descent off it was by far the least enjoyable owing to the slick grass and boggy ground. From here, a horrible, slow section along a river, crossing repeatedly from side to side. This is the section that really needed a couple more recces as i'm sure there has to be a better way but it would mean more climbing. The climb on the other side on the way up Beenaunmore, was one of the toughest but mercifully, wasn't too long and soon Crohane SW(43) was being conquered. Still to come,a nice drag to Crohane Top(44) where stunning views of Kerry and Cork awaited. From here, we contoured to the Mtb UpLift road and our final descent to the Finish. 22 hours 26 minutes. Thanks to all our crew and helpers .