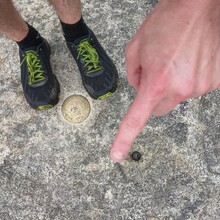 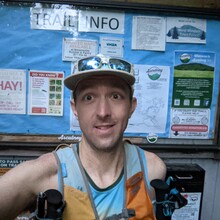 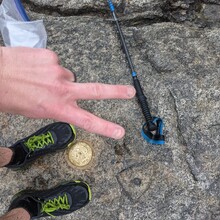 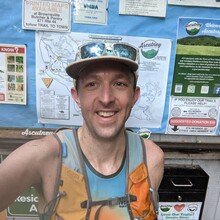 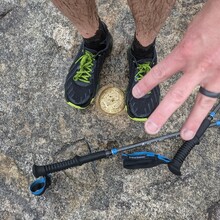 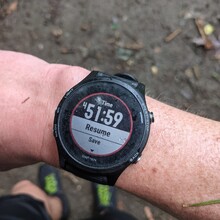 From my first run of the route, I knew there was plenty of time out there for me to reel in, and the weather looked good, so I decided to give it a proper effort.

At 6:10, when it was light enough that I wouldn't trip on too many things, I started off. Knowing the route now, I didn't need to stop at every mountain bike trail intersection, and gained a substantial lead over my previous effort in the first 4 miles to the Weathersfield trailhead.
After spending a minute unsticking one of my poles, I kept a solid pace up Weathersfield, stopping at the cascades for a big drink, and full flask in my filter bottle. The trail was dry, and while it was humid, it was cool, so I thought this would go quickly.

Nearing the top, everything started to be wet and I was in a cloud. The roots and rocks on Ascutney are particularly slippery, and I slowed substantially.

Going down Futures is tough at the top with lots of roots and rocks which felt sketchy wet. It was slow, and I was worried that my time gap was dwindling. Lower down, the trail dried out some and I picked it back up and moved decently.

At the State Park, I quickly filled two flasks with Tailwind and another with water, not wanting to repeat my water issues from my last run when I found no running water on Brownsville, and had to slow substantially to avoid a bonk.
I intended to keep it steady up the auto road, perhaps picking up a few minutes compared with my previous time, especially given the slow travel on wet trails. As I began the climb, it began to rain. I hoped it was just a quick shower, but the higher I went, the harder it rained.

Eventually, I was totally soaked, and was a little nonplussed about it. At least there was ample cooling with the cool rain. The summit ridge was slow in the rain, and the descent down Windsor was also slick and slow.
When I hit the road, I picked it up a bit, smelling the finish and realizing that 5 hours might be within reach. On the road, I saw my buddy Brando leaving Overland due to issues in the cold rain.

I cruised up Brownsville, managing nutrition to avoid bonking. I didn't need any additional fluids, fortunately, because there was no running water on the trail, in spite of the rains (but plenty of puddles).
After tagging the summit a third time, I trotted off down toward Bicentennial (a.k.a. 1976 Trail), moving cautiously on the slick rocks and roots. Bicentennial itself is mostly dirt and is not well-trodden, so there weren't as many roots or rocks compared to the other trails, and I moved quickly downhill, finishing back at the Bicentennial trail kosk in 4:51:59, roughly a 43 minute improvement over my previous run, and about a 42 minute improvement over my first time, and lowering the FKT by about 36 minutes.

I think the wet trails and rain slowed me by about 10 minutes, but made some of that back with ample cooling, so maybe 5ish minutes slower due to trail conditions?

Gear: An old UD Race Vest, BD Carbon Z poles, my Garmin FR935 watch, phone, Hoka Torrents, shorts and a singlet, a hat, and sunglasses that were completely useless in the conditions.  3 500 ml flasks with Tailwind (only one with water at the start), 1 Salomon XA filter (started with water), 1 BeFree filter (never needed), 1 5oz gel flask, pack of peanutbutter crackers, 4 fruit strips, 3 granola bars. I ate the crackers and two granola bars, 3 fruit strips, most of the gel flask, and all of the Tailwind. I drank maybe 3 L fluids total, and was well-hydrated.