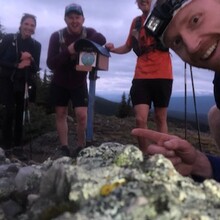 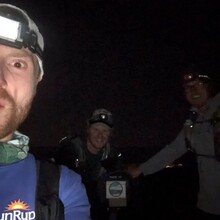 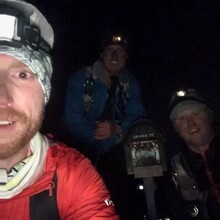 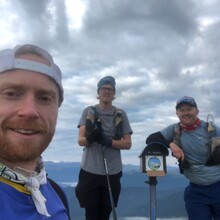 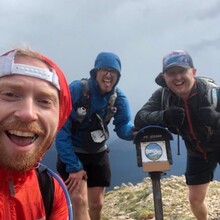 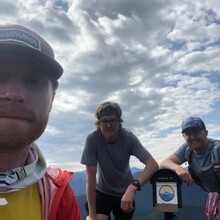 Started our run at 730 pm on Aug 20th in front of a local Grande Cache restaurant called the Ridge. Each of us had a pre run beer just before starting. We made our way down the trail to Victor Lake, then followed Victor Lake road which leads to the highway. Followed the high very briefly then took a right hand turn onto the trail that follows the canal between Victor Lake and Grande Cache lake, which leads you to the Mount Louie trail .We ascended Mount Louie and reached the summit around 9:20 pm (km 9). Descended Mount Louie, then followed highway 40 south and turned off onto the start of Leg 2 of the Canadian Death Race trail which brought us to the base of Mount Flood. We had a cooler with water and some food stashed there to refill our packs. We then made our way up Mount Flood. We reached the summit of Mount Flood around 1 am (km 31). From there we cut across over to Grande Mountain on a trail called Slugfest. We started ascending Grande Mountain via the road/trail that leads to the top. To save some time and KM's we left the road and took an old Ski run that was cut in many years ago. This route to the summit was much steeper and harder to navigate but was well worth it as this route was roughly 2.5 km shorter. We summited Grande Mountain around 3:15 am (km 39). We descended down the back side of Grande Mountain on a coal mine exploration road. The road was severely washed out in many places and was overgrown in spots as well. The road leads straight down into the Smoky River valley. It ends roughly half a km from the train tracks that run parallel to the river. We bush whacked down a steep slope and popped out on the train tracks. We then followed the tracks, crossed the train bridge over the Smoky river, crossed the highway and made it to our next aid station around 5 am  which was a truck we parked there the day before. We stopped for a good while at the truck warming up, eating, drinking coffee and changed into some dry clothes. After the pit stop,  we started the ascent of Mount Hamel via the North East ridge. This route up Mount Hamel is brutally steep and unforgiving but also has some breathtaking views which makes it worth while. The sun rose and lit up the face of Mount Hamel with that alpine glow! It was beautiful. Also ran into a family of Big Horn sheep 3/4 of the way up. Had to have been at least 30 of them. After a gruelling climb we reached the summit of Mount Hamel around 8 am (km 52). From there we started out descent off of Mount Hamel down to the Beaver Dam road via the Leg 4 Canadian Death race trail/route, where we had our crew waiting for us. We made it to our crew at the Beaver Dam around 940 am. After a quick stop and some more coffee we made our way up Mount Ambler. We summited Mount Ambler around 1130 am (km 68). We then descended Ambler back down to the Beaver dam road to meet out crew again. After another quick pit stop with our crew , we descended down  the Beaver Dam road to Highway 40. We made it to the highway and followed it over to Sulpher Gates road and then to the trail head at the base of our final mountain, Mount Stearn. We had a vehicle parked at the base of Mount Stearn with extra supplies and gear. Our crew was also there waiting for us. We started our ascent of Mount Stearn around 3 pm. 3 of our friends joined us for the last summit. Just as we made it to the ridge near the summit we had a storm blow in. The wind was crazy and we got some rain as well. We summited our 6th and final peak around 5pm (km 94.5). From there we cruised back down the trail  to the base of Mount Stearn. We took one final pit stop. From there we  ran back down the Sulpher Gates road to highway 40, then followed the highway across the bridge over the Smoky River, then dipped back into the trees and went up a local trail called "Father Son Time", which leads you up and out of the river valley. From that trail we connected with the Griffiths trail which circles Grande Cache. We the popped back into town , got onto Hoppe Ave and ran back up to the Ridge where we finished our run at 8:48 PM on Aug 21st. 112.35km with 6,016 meters gain in 25 hours 18 minutes and 50 seconds. Each of us then proceeded to have a couple beers to celebrate our finish.